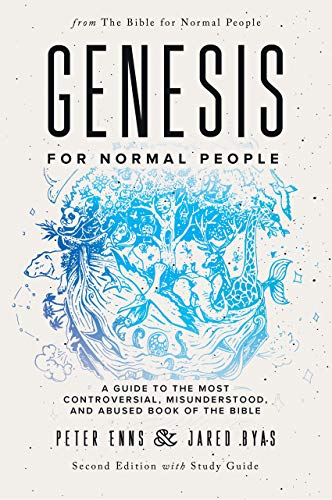 A good introductory level work to the book of Genesis. In this book, Enns and Byas talk about the overarching theme of the book of Genesis as a whole; it’s the story of Israel. Enns and Byas propose that Genesis was written in the exilic period or post-exhilic period (i.e when Israel was in Babylonian Captivity) with the purpose of showing them how, even though their ancestors routinely messed up, God was still faithful to them and carried on with the plan of building the nation anyway. The moral flaws of Abraham, Isaac, Jacob, and Joseph are highlighted in Genesis, but so is their faithfulness, and the author has shown that God was good to his promise to bless those who bless Israel and curse those who curse Israel. Moreover, what the author is doing in some of the earliest parts is subverting Babylonian theology. For example, Genesis 1 exhaults Yahweh as the supreme Creator of all and ascribes to him some things ascribed to the Babylonian God, Marduk. And goes one step further. For example, Marduk had to overcome a chaos dragon named Tiamut before he created the heavens and earth. This was not so with Yahweh. Yahweh simply showed up over “The Deep” (i.e Tiamut’s place of residence) and the chaos dragon was nowhere to be found. God just showed up and got to work. No battle needed (of course, later books such as Job and the Psalms do depict God going to war with a sea dragon of chaos, but Genesis depicts such a fight as God showing up to the ring and his opponent being too scared to show his face). He just shows up and starts bringing functions to the universe.
Given his book “The Evolution Of Adam”, which left a bad taste in my mouth, I didn’t expect to agree with Enns as much as I did. I expected to find myself disagreeing with about half of it, but I read the book to glean what I thought Enns probably would get more or less right. After all, nobody is 100% wrong about everything they write, and you can even learn from people you disagree with. However, to my surprise, Enns’ book was surprisingly informative.

It wasn’t quite as in depth as I would have liked, but it wasn’t designed to do that, and the authors admit up front that this was going to just be a broad overview of the book. Now, I said that “Enns and Byas propose that Genesis was written in the exilic period or post-exhilic period”. This is true. They adhere to what is known in layman’s terms as “The Documentary Hypothesis” or, to use the more scholarly term, JEDP. But while I disagree that Moses had NO hand whatsoever in the composition of the Torah, I’m willing to concede that someone else might have written Genesis, and especially the parts near the end of the Torah that record Moses’ unsurpassing humility and his death. I would hold to what Michael Heiser calls “A Mosaic Core” view. Maybe all Moses wrote down were the laws and regulations. Maybe he recorded none of the historical narrative at all. Or maybe he wrote only two of the five books. But Moses had to have SOME impact on the shaping of the Torah. Why? Because Jesus said so! Everytime Jesus talks about what the Torah says, He will talk about it as Moses being the one who wrote what is in the scriptures. For example, in the context of Jesus’ dialogue with the Sadducees, we read in Mark 12:26, “And as for the dead being raised, have you not read in the book of Moses, in the passage about the bush, how God spoke to him, saying, ‘I am the God of Abraham, and the God of Isaac, and theGod of Jacob’?”

And that’s just one example. However, I’m quite comfortable with the idea that Moses didn’t write every verse from the first verse of Genesis to the last verse of Deuteronomy. Indeed, even Christian scholars whom we might label “fundamentalists” have entertained, for a long time, that the Torah probably had a later editor. They might think Moses wrote Genesis, and even the Primeval History, but virtually no one believes Moses wrote ALL of it. But given that Jesus puts his stamp of approval on Mosaic authorship, and given that Jesus’ claim to be God, His death, and His resurrection establish Jesus’ divine claim, then we have no choice but to affirm at least a bare minimum form of Mosaic influence. And by the way, Jesus’ claim to be God, His death, and His resurrection are all backed up by powerful historical evidence. I recommend you check out books such as Michael Licona’s “The Resurrection Of Jesus: A New Historiographical Approach”, “The Case For The Resurrection Of Jesus” co-written by Michael Licona and Gary Habermas, or N.T Wright’s “The Resurrection Of The Son Of God” to check that out.

Anyway, this book and its essential premise really doesn’t force a commitment to JEDP as the premise in “The Evolution Of Adam” did (which Enns took up half the book arguing for). All it really requires is that you give up Mosaic authorship of Genesis, which I wasn’t very confident of before picking the book up anyway.

If you’re a new student of The Bible and want to get your feet wet in the world of Old Testament scholarship, “Genesis For Normal People” is one of the books I recommend. I think the “normal person” will learn a lot and won’t feel intimidated by scholarly jargon, Hebrew words, or other things that might fill a more indepth treatment. This is the second book by Enns that gets a full endorsement by me (the other being “Inspiration and Incarnation: Evangelicals and The Problem Of The Old Testament”) and the third book by him I’ve read overall. Maybe I’ll give just a good reviews for the other books in the “For Normal People” series when I get around to them. However, for now, I’m studying Genesis with the intent of hopefully producing a book of my own, and I’m trying to read every important name I can on this subject so that I feel I’ve done by due dilligence. So… “Exodus For Normal People” et. al. will have to wait.