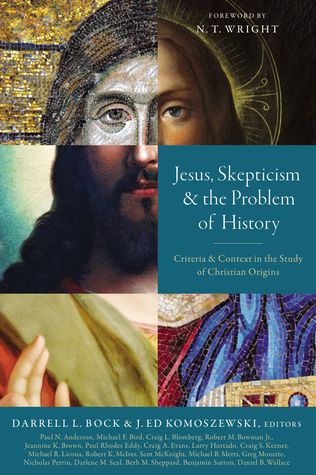 “Jesus, Skepticism, and The Problem Of History: Criteria and Context In The Study Of Christian Origins” is a book written by a plethora of different New Testament scholars such as Darrel Bock, Craig Blomberg, Daniel B. Wallace, Craig Keener, Michael Licona, Scot Mcknight, Michael Bird, and several others. The book is a book on Historical Jesus studies and each chapter is, more or less a stand-alone essay written by each contributor of the book. The book is heavily scholarly in tone, being heavily footnoted with scholarly sources and materials which each contributor draws upon in each chapter while also opening with an abstract and closing with a conclusion. Although I consider the book to be in the scholarly category rather than the pop level category, that isn’t to say that it’s overly heady. If you’ve done at least some basic study in Historical Jesus, you should be able to understand the terms and phrases used in this book.

Some of my favorite essays were the ones that dealt with the validity of the use of the criteria of authenticity and the reliability of the oral tradition of Jesus prior to its being written down in the gospels. This is because these are important subjects for historical apologetics. I use the criteria of authenticity heavily when I defend the historicity of Jesus’ divine self-understanding and resurrection from the dead (such as in my 10 part blog post series and in my own book “My Redeemer Lives: Evidence For The Resurrection Of Jesus“). Also, it’s important that we can have confidence that what Jesus said and did was remembered and transmitted reliably until it could finally be written down. The two authors who talk about oral tradition do a good job of making the case that we can trust that the gospel authors faithfully remembered the things they talked about. It is also important for apologists to be able to defend the criteria of authenticity such as the criterion of dissimilarity and the criterion of embarrassment if they intend on using them in their apologetic for the resurrection.

Many of the essays in the book largely seem to be a response to another book called “Jesus, Criteria, and The Demise Of Authenticity” edited by Chris Keith and Anthony Le Donne, but not all of them are, such as Beth Shepphard’s essay on The Sermon On The Mount. I like Michael Licona’s essay on how the criteria can establish some of “The Minimal Facts” such as Jesus’ death by crucifixion and the disciples claim and belief that Jesus appeared to them alive after His death.

Overall, I consider this to be a VERY valuable book for those interested in studying the life of Jesus from the perspective of a historian (as opposed to a purely theological perspective), and I hope you will go over to ChristianBook.com, Amazon.com, or Barnes N’ Noble and order yourself a copy.

BOOK REVIEW: “Is God A Mysoginist?”