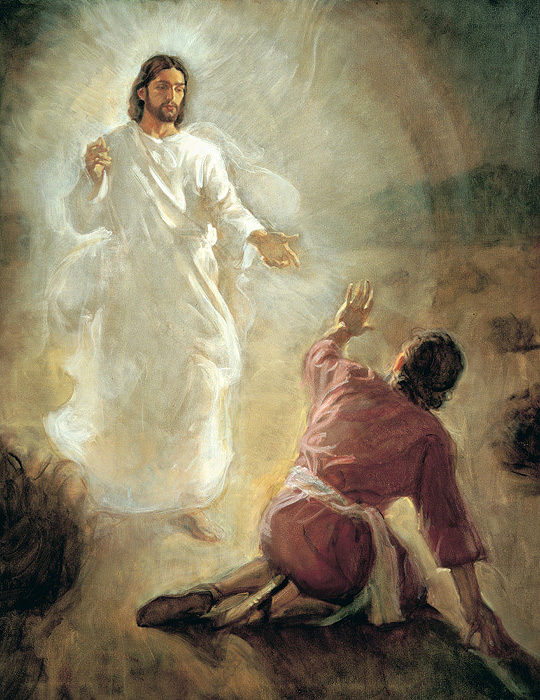 I’ve been seeing an anti-Arminian meme floating around Facebook that shows a painting of Paul on the ground when Christ appears to him, and the caption says “So there I was on my way to free Christians when I used my Free Will to become one”. The implication is that Paul didn’t use his free will to become a Christian. I’ve heard this meme’s point spoken in the form of an actual argument as well. The argument is that Jesus’ appearance to Paul would have utterly prevented him from denying the truth of the resurrection and the Christian faith, and therefore he would have no choice but to accept it as true and therefore become one.

Does this meme make a good point? I don’t think it does.


For one thing, the meme seems to imply an overwhelmingly common misunderstanding of the Arminian view of salvation. We don’t believe that we can just up and decide to become Christians. We need grace! Without grace, no one would or could choose to come to Christ. Instead, we would all hate Him and choose to reject Him. We believe this is what Jesus meant when He said: “No one can come to me unless The Father who sent me draws him.” (John 6:44, c.f John 6:65). We are totally depraved and this depravity bends our wills away from God. We need The Holy Spirit to enable us to choose Him. It’s analogous to how a hostage is tied up and ergo cannot choose anything but to sit in the chair in the dungeon. But if someone comes along and unties his hands and feet, he can then choose to leave the dungeon or stay like he had been all long. This is what theologians call “Prevenient Grace”. We need prevenient grace if we’re going to choose anything other than rebellion against God.

Now, I won’t go into defending this position biblically in this blog post. I’ve already done that in other blog posts, so if you want to investigate the biblical evidence for the Arminian position, check out the blog post I wrote on this subject titled “What Biblical Evidence Is There For Prevenient Grace?”.

A more accurate caption would be “So there I was on my way to kill Christians when God’s prevenient grace hit me and I decided to respond positively to it.”


The problem here seems to lie in the dramatic nature of Paul’s conversion. Paul didn’t just hear the gospel preached to him and then he decided to respond positively to it. He met the living Lord Himself! Christ appeared to Paul in all his glory and splendor! Paul encountered the resurrected Christ. How could anyone continue to deny Christianity’s truth after having an experience like this?

I am not at all persuaded by this. It doesn’t seem like to me that Jesus’ appearing to Paul made his conversion inevitable. I think the atheists of today show us that if you really, really, really want to disbelieve, you’ll find a way, no matter how implausible or intellectually strained the rationalization is. Paul could have talked himself out of believing that Jesus appeared to him by telling himself that it was an illusion or a hallucination, or a dream. If he were determined enough, he could have found a way to explain away his post-mortem appearance experience. In fact, modern day skeptics appeal to these explanations to explain not only Paul’s experience but the appearance to the disciples and James as well! If modern day skeptics can appeal to these explanations, why couldn’t Paul? Why was Paul unable to say “You’re not really here, Jesus! You’re just a bout of indigestion!” Paul of Tarsus could have explained away what just happened to him and then carried on with his plan on exterminating the church.

By the way, I explain why none of these explanations work in “The Minimal Facts Case For Jesus’ Resurrection PART 2”

Moreover, let’s not forget that the Pharisees also saw Christ and witnessed his miracles (they explained it away by saying that He did it via demonic assistance). They even witnessed the raising of Lazarus (John 11). They also were aware of the tomb’s emptiness post-resurrection and heard the account of the soldiers guarding the tomb that an angel came and rolled back the stone (see Matthew 28). Yet, they were still able to reject Christ after all of that. So I find the idea that Paul seeing a vision of Christ made his conversion irresistible very unpersuasive.


In Acts 26:19, Paul says “I was not disobedient to the Heavenly vision” in Acts 26:19, implying that he could have continued to be an unbeliever. Now, a Calvinist might respond “Well, of course, Paul wasn’t disobedient! His free will was overwhelmed by Christ’s appearance! How could he be anything but obedient!” but this isn’t a very convincing response. Imagine if I was married and I was handcuffed to my wife to ensure that I never saw other women. Everywhere she went, I went. Everywhere I went, she went. We are never apart for a single moment in our marriage. Now, imagine me saying “I have been faithful during this entire marriage. I never broke my vow”. You would obviously say “Well, duh! You’ve never been apart from your wife! We knew that, Captain Obvious.” The very fact that I would say such a thing implies that I at least believe I could have chosen otherwise. And if it were the case that I truly could not do otherwise, I wouldn’t even bring it up.

Paul Didn’t Get Regenerated At That Moment


Was Paul regenerated on the road to Damascus or several days later? The narrative about Jesus sending Ananias to him seems to suggest later (see Acts 9:10-18). Paul did not receive the Holy Spirit’s indwelling on the road to Damascus but, after 3 days of obedience to Christ, Ananias put his hands on Paul and he received both his sight and the indwelling of the Holy Spirit. According to the Calvinist, the Holy Spirit’s indwelling initiates regeneration, however, this is an impossibility with Paul. Faith indeed comes before regeneration. Why didn’t Paul receive Christ on the road to Damascus? My guess is that Paul hadn’t decided to follow Christ until 3 days after the fact. He was probably mentally wrestling with himself over what happened that whole time, as Manga Metamorphosis depicts. “I was so sure these Christians were heretics! Could I have been wrong? Have I really been fighting against God rather than for God?” We’ll never know for sure why it took Paul so long post facto to make a decision for Christ, but that’s my guess.


Contrary to what Calvinists will tell you, Jesus did not violate Paul’s free will when he appeared to them. This is not a good argument for irresistible grace.

Response to Bushey’s Critique Of My Prevenient Grace Article