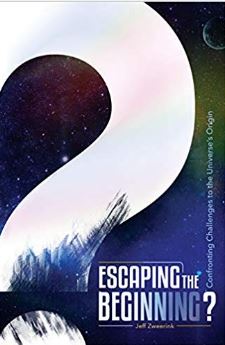 Colin Burgess is the author of this book review. Colin Burgess sent me an e-mail asking if he could post his review of this book here. While I haven’t read this book myself, based on Burgess’ review, it looks like an awesome read, especially since I’m enthusiastic about The Kalam Cosmological Argument. Newcomers to this website can click here to read articles I’ve published about The Kalam Cosmological Argument. Anyway, onto Burgess’ review.

Of all the arguments for the existence of God, few are more popular than cosmological arguments, as popularized by William Lane Craig, which argue for a non-arbitrary stopping point for causality for the universe. If the universe had a beginning, then it has a beginner. This is a philosophical argument, which Hugh Ross has noted must be buttressed by space time theorems, which would state that,

Dr. Jeff Zweerink, in a recent book, “Escaping The Beginning,” takes on this challenge and argues for the contingency of the universe, that it is not, in itself, necessary, but that it finds justification for its existence outside, not within, itself.

This modal argument may be summarized as such:

The universe existing is self evident, and this simple observation requires little defence. The universe being contingent is another story. Does the universe demonstrate it is necessary or contingent?
A second argument can be framed, as such:

Dr. Zweerink seems to be defending premise 2 and 3 of the previous arguments, in his book.

In the final chapter of this book, he acknowledges that the Christian religion makes some claims which put it in the realm of falsifiability, meaning that if these claims are demonstrated to be false Christianity fails. Such risky conjectures, especially in a time when science was not developed as a formal discipline, are indeed bold.

These claims, he notes, are:

Dr. Zweerink dedicates an entire, yet brief, chapter to the philosophy of time, which discusses both the A and B series of time, and if we can even define time. A series of time (presentism) holds that the present is what the future is being chased by, and the past is subsequently discarded. This view holds that time is what, according to the quote in the beginning, “stops everything from happening at once.” While, the B series holds that there are no privileged moments, and that any notion of temporal becoming is illusory.

In this chapter, Dr. Zweerink does not seem to reach a strong conclusion, nor could he on such a large topic, in a short chapter. But he does reason well that with there being no actual time in which events take place, cause and effect relationships break down, and this is precisely what science studies. If the principle of causality breaks down, that A and B are somehow causally related, one cannot study how the universe behaves. A block universe, as posited by the B series of time, would be impossible to meaningfully study. I think in this chapter he gives the reader enough insight into the discussion to appreciate the rest of the discussion, although one would be wise to explore this debate further in other resources. Unfortunately, Zweerink does not discuss what the relationship of an eternal/Necesary God would be to a finite universe, although this does not kill the core arguments. It would have just been helpful.

There seems to be no escaping these attributes, even when one denies the existence of a divine substance in which they inhere, the atheist is merely left assigning them to the universe. But Dr. Zweerink argues the universe fails to exemplify these characteristics.

So long as the universe keeps “shedding its skin,” or experiences states of change, it goes from states of existence to non-existence, and demonstrates it is not immutable, or Necessary. There must be some grounding necessary moment, or entity. This is a matter of metaphysics, not physics to explore.

Zweerink argues against popular physicists, like Hawking and Krauss, that gravity is a sufficient cause for the universe to arrive in its present state. Zweerink notes how the laws of physics are not, in themselves, prescriptive, but are descriptive. In other words, they are not to be confused with agency, just as one would not confuse a murder weapon with a murder suspect. Saying “the gun did it” is not very enlightening when one is interested in looking for an agent.

He notes that no matter what, we are left accepting the existence of some brute necessity. He further notes that the God of the Christian faith best fits the role of the agent, as the nature of God is a working assumption from which one might proceed to further study the object of creation.

For instance, if one believes God is capricious, or malevolent, this might act as an intrinsic defeater to meaningfully studying the universe. Given this as a working assumption, how can one proceed to study nature and expect to not be deceived by it, or their god-given senses? In the way of epistemology, such assumptions are a death kneel.

In the way of providing arguments for deism, in that some impersonal god exists that created a contingent world (The god of the philosophers) I would say Zweerink writes an excellent book contending for this. Does the book deliver on further leading one to the stronger, more specific conclusion of a theistic God? Well, in the final chapter he provides 12 verses, but not limited to, which provide support for a theistic and Biblical God which best fits the model required for causality, in that creation exists as a temporary/finite realm, but that it has a purpose, its cause is transcendent, and eternal, and that the universe is expanding as a function of time, and dark energy. The conclusion for theism, in my opinion, is weaker here than for general deism. But in the way of furnishing plausibility structures, deism is a crucial stepping stone for accepting more specific claims about the nature of God, simpliciter.

While this book is not overly technical, it assumes the reader has some prior knowledge of the science being discussed, such as quantum mechanics, as well as the thoughts of Krauss and Hawking (Not discussed here.) It also assumes one is aware of the cosmological arguments which are being defended here, although implicitly. If one is not aware of the ideas of Multiverse, and String Theory, some of this might also be lost on them.

A chapter outlining the contingency arguments for the universe may have been helpful for those less aware of the philosophical ideas in natural theology. However, I would highly suggest this book for anyone wanting to better handle the cosmological arguments for God’s existence.

I received a free copy of this book, for review purposes, and was not required to write a favorable review.