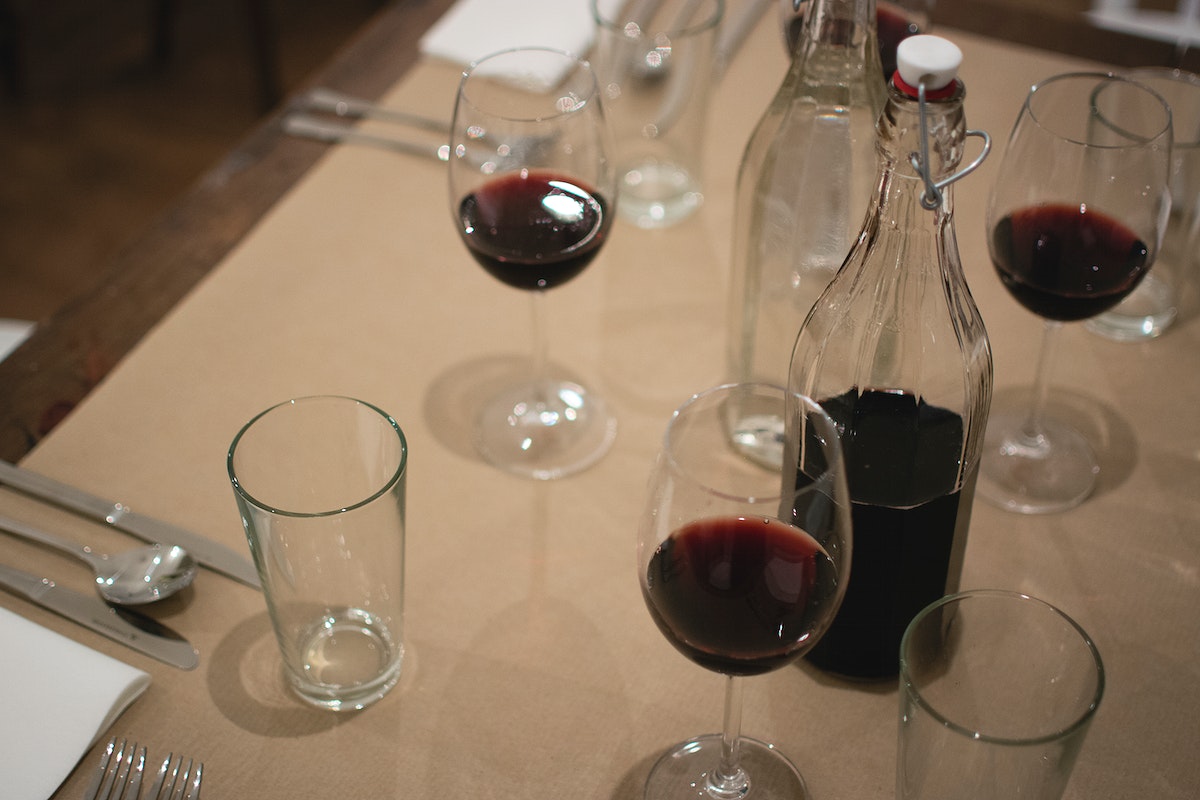 Red wine on a table by Jakub Kapusnak is licensed under CC-CC0 1.0

Scripture does not necessarily forbid a Christian from drinking beer, wine, or any other drink containing alcohol. In fact, some Scriptures discuss alcohol in positive terms. Ecclesiastes 9:7 instructs, “Drink your wine with a merry heart.” Amos 9:14 discusses drinking wine from your own vineyard as a sign of God’s blessing. Proverbs 31:6 says to “Give strong drink to the one who is perishing, and wine to those in bitter distress;”

Jesus changed water into wine. (see John 2:1-11) It even seems that Jesus drank wine on occasion. Jesus drank wine at the last supper, and he says that He will not drink of it again until He drinks it anew with His disciples in His Father’s Kingdom.

“While they were eating, Jesus took bread, and when he had given thanks, he broke it and gave it to his disciples, saying, ‘Take and eat; this is my body’  Then he took a cup, and when he had given thanks, he gave it to them, saying, ‘Drink from it, all of you. This is my blood of the covenant, which is poured out for many for the forgiveness of sins. I tell you, I will not drink from this fruit of the vine from now on until that day when I drink it new with you in my Father’s kingdom.’”– Matthew 26:26-29

So, no. There is nothing wrong with drinking an alcoholic beverage. What The Bible condemns is drunkenness. The Bible says in Ephesians 5:18 “Do not get drunk on wine, which leads to debauchery. Instead, be filled with the Spirit,” Galatians 5:19-21 mentions drunkenness as one of the “works of the flesh”.

So, it’s a biblical fact that getting drunk is a sin. The Bible also not only says that getting drunk is a sin, but it also tells us why it’s a sin. God forbids us to get drunk because of the numerous negative affects it can have on our lives. Anyone who has struggled with alcoholism can tell you what a living Hell it is to not be able to stay away from alcohol and spending many of your waking hours drunk.

The Bible says “Who has woe? Who has sorrow? Who has strife? Who has complaining? Who has wounds without cause? Who has redness of eyes? Those who tarry long over wine; those who go to try mixed wine. Do not look at wine when it is red, when it sparkles in the cup and goes down smoothly. In the end it bites like a serpent and stings like an adder. Your eyes will see strange things, and your heart utter perverse things.” – Proverbs 23:29-35

“Strong drink is a brawler, and whoever is led astray by it is not wise.” – Proverbs 20:1

An alcoholic would likely agree with the grim pictures the book of Proverbs paints of a person who “tarrys long over wine”. For the addicted person, looking at a glass of red wine is a powerful temptation. That’s why the writer says “Do not look at wine when it is red, when it sparkles in the cup and goes down smoothly”. Lingering around the source of your temptation is sure to guarantee that you will give into it. That’s why The Bible says not to continuously stare at it. Not to stare at the wine when it’s sparkling in the cup and “when it goes down smoothly” (probably referring to the condensation on the outside). Paul says in 2 Timothy 2:22 to “Flee from temptation”. Don’t linger around the source of your temptation! Run away!

Proverbs 20:1 calls strong drink “a brawler”. This is most likely referring to people who get violent when they’re drunk. How a person behaves when they’re drunk differs from person to person. Some get silly, others get violent. The latter is more dangerous as it could lead to you losing your temper and injuring or killing somebody during your state of drunkenness, which you would never do under ordinary circumstances.

Moreover, being drunk can cause you to say things you normally wouldn’t say. When a person is drunk, he’s not as uptight or reserved as he normally would be. Sometimes that affects the filters of our minds. For some of us, that causes us to say what’s in our mind which we would normally keep to ourselves, things that are very inappropriate. As I like to say “A drunk mouth reveals what a sober mind conceals”. Drunkenness can also lead to sexual promiscuity, which is definitely immoral and sinful (see 1 Corinthians 6:9-10, Romans 13:13, Hebrews 13:4, Galatians 5:19-21).

Therefore, God wants you not to get drunk because of the negative affects it will have on your life. If you get drunk, you may become violent (Proverbs 20:1), getting drunk enough times consecutively will get you addicted to alcohol (Proverbs 23:29-35), and it will likely cause you to say inappropriate things and/or become sexually promiscuous (how many people have woken up next to a complete stranger after getting drunk at a wild party and don’t even remember how they got there?).

If someone believes it is wrong, you should not put pressure on them to engage in the activity. The Bible says that when you force someone to do something they believe is wrong, you are sinning (1 Corinthians 8:12). It doesn’t matter if what they’re doing is ACTUALLY wrong, what matters is whether they believe what they are doing is wrong. . In the broader context of 1 Cortinthians 8, Paul was talking about whether or not it was OK to eat meat that’s been sacrificed to idols. Paul states his opinion on the matter. He says it’s not a sin to eat meat sacrificed to idols because the gods that those idols represent don’t really exist (1 Corinthians 8:4-6) and that we’re no better or worse off no matter what we decide to do with the meat (1 Corinthians 8:8). However, Paul then warns that not everyone believes as he does (i.e that eating meat sacrificed to idols is an alright thing to do) and that you shouldn’t eat such meat in front of those Christians because that might tempt them to do the same thing, and they might give into this temptation and they would therefore violate their conscience. He then says “And when you sin against other believers by encouraging them to do something they believe is wrong, you are sinning against Christ.” (1 Corinthians 8:12). This rule applies to any situation, not just meat offered to idols. We should never put pressure on someone to violate their conscience.

Moreover, if someone used to be an alcoholic, having alcoholic beverages out when they come around will likely be a stumbling block to them. It will be a source of great temptation to them if they see bottles of wine or beer out or if they see you drinking alcohol in front of them. For a recovering alcoholic, they will always have that predisposition to alcoholism. One drink and they’re back where they came from. If you know someone who has an issue with alcohol, its best for you not to drink it in front of him lest you become a source of temptation.

“It is good not to eat meat or drink wine or do anything that causes your brother to stumble.” – Romans 14:21

Drinking alcoholic beverages is not sinful. Jesus Himself drank wine after all, and Jesus was sinless! However, The Bible does say that getting drunk is a sin. If you drink only a small amount of alcohol and you don’t get drunk, you have not sinned. However, my admonition is that you do avoid alcohol completely. No need to play with fire and risk getting burned (how much is too much differs from person to person).

Q&A: Are Having Depression and Anxiety Sins?