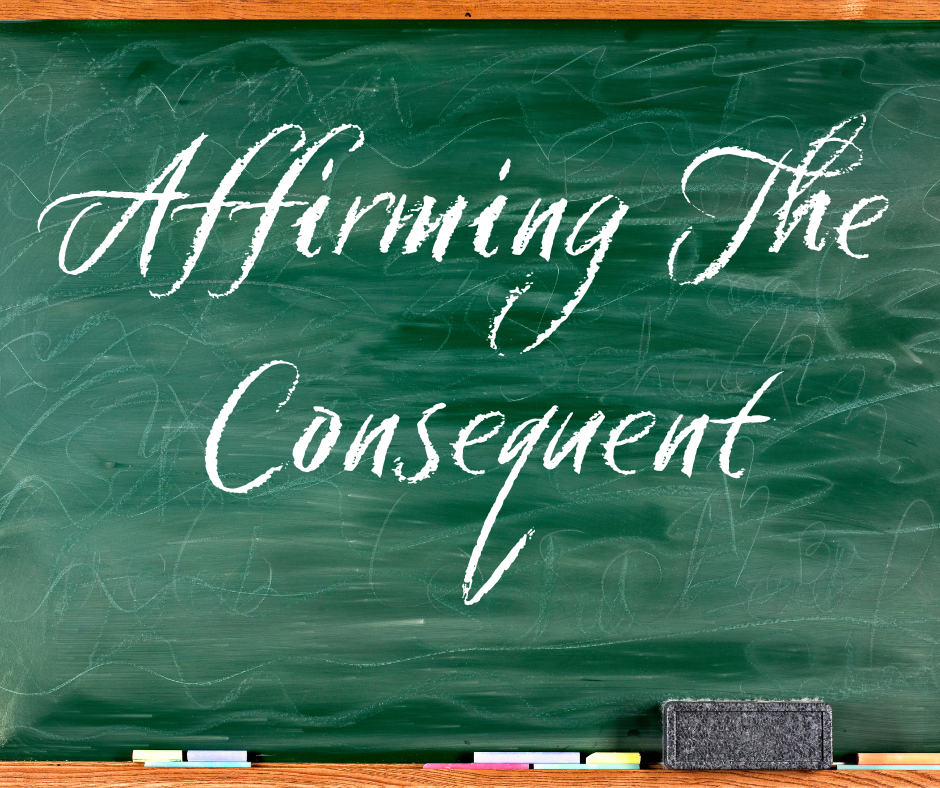 This is part 25 of a series I’m writing on logical fallacies.We’ve looked at 23 different informal fallacies up until this point. There are
many more kinds of informal fallacies than the ones I’ve talked about in this series, but I haven’t really encountered any of them during my debates with atheists, agnostics, or other Christians (on in-house issues), and as already stated, I wanted to look at the most common fallacies that often appear in the context of Christian Apologetics. This is for 2 reasons: (1) to stay true to the theme of this blog. (2) To give some actual examples of these fallacies in the context of religious debates so that my Christian readers can be on the lookout for them.

Last time, I talked about a formal fallacy called “The Fallacy Fallacy” which is when someone concludes that a conclusion is false on the basis that the argument leading to it was fallacious. This is fallacious because one can argue for a true conclusion using bad reasoning. The conclusion can still be reached though if we just simply use a different argument, one that is not logically fallacious.

Affirming the consequent, sometimes called converse error, fallacy of the converse or confusion of necessity and sufficiency, is a formal fallacy of inferring the converse from the original statement. This is what the fallacy looks like in logical form:

An argument of this form is invalid, i.e., the conclusion can be false even if the 2 premises are true.

This is logically fallacious because it affirms the consequent. The fact that Todd became a theist doesn’t mean he was convinced by The Kalam Cosmological Argument. Maybe he came to believe God exists through some other argument like The Ontological Argument or maybe he concluded God’s existence from the resurrection of Jesus after hearing The Minimal Facts Case For Jesus’ Resurrection. Maybe Todd didn’t come acknowledge the existence of God through any intellectual route. Maybe Todd came to believe God exists through a religious experience. Todd may believe God exists but he may think that the Kalam argument is a fallacious argument. Or maybe Todd never heard the argument before coming to know that God exists.

Now, you wouldn’t be committing any logical fallacy if you reasoned as follows

This is modus ponens rather than affirming the consequent. Your conclusion would be valid under this reasoning (and of course assuming both premises are true). Now, it seems both premises are true. This is because if one thinks an argument is both valid and has true premises, then it means he believes the conclusion as well. No sane person would believe an argument is both logically valid and has true premises yet not believe the conclusion is true. If Todd came up to you and told you he’s convinced The Kalam Cosmological Argument is successful, you would be justified in inferring that he now believes that a Creator brought the universe into being even before or even in the absence of him explicitly stating “I now believe God created the universe.”

Why did I put my own name in this example? Because a Roman Catholic in the comment section on this site actually committed this fallacy when we argued with each other over the topic of sola fide. Several times he called me a Calvinist! Anyone who has spent time reading the articles on this blog will know that I am absolutely not a Calvinist. I have an extremely low view of Calvinism that rivals that of Roger Olson’s and John Wesley’s. I am an Arminian-Molinist.

We believe Genesis 1-11 are to be read literally (i.e as historical events rather than allegory), we believe that God created specially (i.e He spoke the first of every animal species and the first 2 humans into being), and many of us even believe that it was human sin that prompted God to curse creation (we just place it in logical order rather than chronological order). We have more in common with YECs than many of them think.

Well, that does it for today’s blog post. Come back to Cerebral Faith tomorrow to learn about another logical fallacy. It’s important that we, as Christians, learn how to spot logical fallacies. Believers in Christ all over the world are being talked out of their faith by non-Christians who use bad reasoning. Their arguments, to the untrained mind, sound persuasive when they really shouldn’t because they’re logically fallacious. Therefore,
if we can spot logical fallacies when they’re committed, then we can avoid being fooled.