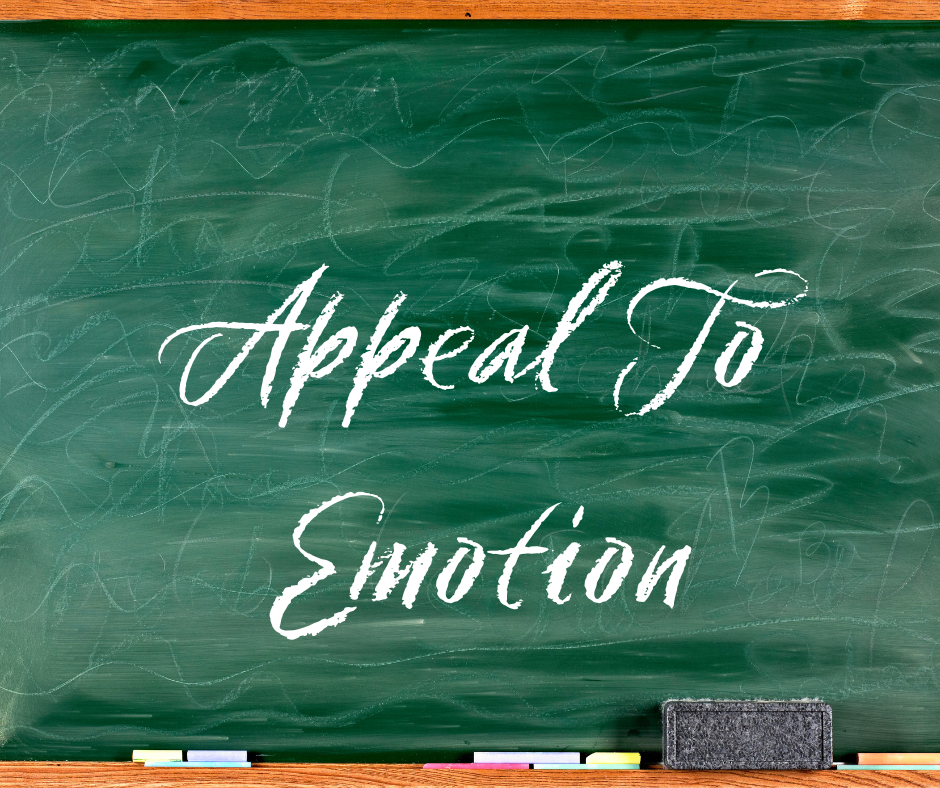 There are actually a lot more informal fallacies than the ones I’ve talked about so far plus the ones listed above, but they rarely if ever come into discussions about God’s existence, the resurrection of Jesus, or any other topic relevant to Christian Apologetics, and my goal in each of these posts was to give 2-3 examples of these fallacies occurring in conversations between the apologist and the skeptic or between 2 disagreeing Christians. Since the fallacies not mentioned in this series don’t occur — at least in my experience — in apologetic discussions, I would have a hard time coming up with examples on that theme. Secondly, there are so many of the informal type that this series could potentially run into late August [1]that’s my guesstimate, I haven’t actually run the numbers. You can see how many articles I would have to write by looking at this list on Wikipedia.

So let’s now move onto….


The Appeal To Emotion Fallacy

As the name suggest, this fallacy makes emotional appeals to try to refute a point being made. This is fallacious because emotions have no baring on truth. For example, you might not like the fact that X is true, but that doesn’t mean X isn’t true. You might like that Y is true, but that doesn’t mean Y is true. The truth of X or Y is independent of whether it would make you happy if X or Y is true.

Examples Of Appeals To Emotion

This fallacy would only be committed if one said that their reason for believing The Bible is because liked the doctrines that it taught. But neither I nor any Christian I’ve ever met has given that as epistemological grounds for believing it. Moreover, one could probably argue that a lot of people DON’T believe Christianity is true on the basis of feelings, as I’m about to demonstrate.

In this example, we can see the unbeliever protesting Christianity because of what it would entail about what happened to his parents after they died and what it would mean for him and his life choices. But whether he likes the thought of having to give up his pet sins or the thought that his parents are paying for the sins they committed in this life, is irrelevant to whether or not Christianity is true.

Granted, not many unbelievers would be nearly as candid as this, but a surprising few have protested to Christianity in this way. Take a look at the following quotes for real life examples:

“[A fear of religion] has large and often pernicious consequences for modern intellectual life. […] I speak from experience, being strongly subject to this fear myself: I want atheism to be true and am made uneasy by the fact… that some of the most intelligent and well informed people I know are religious believers. It isn’t just that I don’t believe in God and, naturally, hope that I’m right in my belief. It’s that I hope there is no God! I don’t want there to be a God; I don’t want the universe to be like that.” – Thomas Nagel [The Last Word (Oxford, 1997)], ………emphasis mine


“If, however, there is a rational being who has designed the universe for a purpose, who can say whether that being’s plans and mine are compatible or what the consequences might be if they are not? Chaos, having brought us into existence, is unlikely to make any demands on our time or attention; who can tell what a Logos might have in mind for us? A special case of this sort of motivation is nicely expressed in a little verse by Arthur Hugh Clough: “There is no God,” the wicked saith, “And truly it’s a blessing, For what he might have done with us It’s better only guessing.” But this motivation can be generalized beyond the case of a God who has moral concerns and punishes the wicked. If, moreover, “life, the universe, and everything” are the result of mere chance, one may well be one of the more important and impressive beings in existence […] There are a great many people who would be quite taken aback by an invitation to move to a world in which human beings had been created to serve the purposes of a Logos” —  Peter Van Inwagen:[Metaphysics 3rd ed.]

Another Example: After Julie went through a lengthy exegetical argument for the possibility of apostasy, Suzan responded that she couldn’t accept that it was possible for one to lose their salvation because then she would have to live in fear that she might reject Christ some day.

In this example, Suzan didn’t engage with Julie’s arguments that a person who truly accepted Christ at one point could turn and reject Him later, and instead argued that she would be fearful of her own salvation of such a thing is possible. Suzan didn’t reject Julie’s arguments, but instead expressed emotional dislike of Julie’s conclusion.

That does it for this week’s post. Come back to Cerebral Faith tomorrow to read about another one.