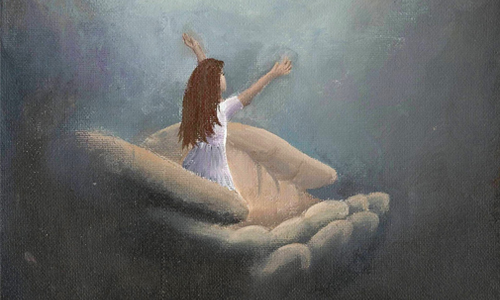 This is part 2 in a series on apostasy and eternal security. In the previous blog post, I explained that I had wrestled with the question “Can A Christian Lose Their Salvation?” for many, many years. I was torn on the issue because both sides seemed to present such overwhelmingly powerful cases for their position. It got so bad that I started to think the scripture might possibly contradict itself on the issue. However, I eventually came to a conclusion that I find intellectually satisfying and does justice to the whole of scripture.

I’ve adopted a view I call “The Can/Won’t Model Of Eternal Security”. I believe Christians can forfeit their salvation, but they just won’t. In the previous blog post, I said that I was going to make a case for the view that apostasy of true Christians is possible, and then I did. In this blog post, I will be making a case for The Perseverance Of The Saints, a.k.a Eternal Security, a.k.a Once Saved, Always Saved. In the third part of this series (the next one), I’ll explain how I can hold to the view that Christians can apostatize and affirm the P of T.U.L.I.P without affirming a contradiction. In other words, I’ll explain how it all works out.

If you haven’t read Part 1 of this series, go ahead and do so. Then come back here.

Now, does The Bible teach that true believers will never lose their salvation? I think the answer to that question is yes. Let’s examine some passages that teach this.

Passages Teaching Perseverance Of The Saints

Well, the one that most commonly comes to my mind is John 10:27-29. In this passage, Jesus says “My sheep here my voice. I know them and they follow me. I give them eternal life and they shall never perish. No one can pluck them from my hand. My Father, who has given them to me, is greater than all, and no one is able to snatch them out of the Father’s hand.” This seems to suggest that once you’re given eternal life, that’s it! You’ll never perish! No one can cause you to lose your salvation. Satan, all the demons of Hell, or the flesh or the world, all of them are completely impotent in causing you to become an unsaved, Hell-Bound sinner like you used to be. You are safe and secure in God’s hand. No one will force you to abandon Jesus Christ. This seems to support The Perseverance Of The Saints.

Now, the Can/Will advocate typically responds to this passage by saying “This passage is only teaching that no outside force will cause us to abandon Christ against our will. It says no one can pluck us from His hand, but that doesn’t mean we can’t willingly choose to leave His hand if we want to.” I used to think that this interpretation worked for John 10:28-29, but I no longer think so. It is indeed saying that no outside force will drag us away from Christ against our own wills, but look at what Jesus says in the first part of the passage. “I give them eternal life and they shall never perish.” This is a de facto statement made by Jesus. He says that He gives us eternal life and we won’t perish. If we ever did hop out of God’s hand and ergo forfeit our salvation, we would perish! But Jesus says here that we won’t perish! He says “They shall never perish”. Not “They shall never perish as long as they don’t hop out of my hand”. There’s no conditional statement here. Here, it’s just a clear-cut de facto “They shall never perish.”

Romans 8:38-39 says “For I am convinced that neither death nor life, neither angels nor demons, neither the present nor the future, nor any powers, neither height nor depth, nor anything else in all creation, will be able to separate us from the love of God that is in Christ Jesus our Lord.”

This passage in the eighth chapter of Paul’s letter to the Romans says that nothing in all creation will separate us from God’s love. Nothing. Not angels, not demons, not height, not depth, not the present, not the future, nothing! Once again, the Can/Will advocate will say that this is only saying that no outside force will drag us away from God, not that we can’t willingly choose to abandon Him. While this interpretation won’t work for John 10:28-29, I don’t see why it couldn’t work for Romans 8.

Jude 24-25 says “To Him who is able to keep you from falling and to present you before his glorious presence without fault and with great joy—to the only God our Savior be glory, majesty, power and authority, through Jesus Christ our Lord, before all ages, now and forevermore! Amen.” (emphasis mine)

1 John 2:19 says “They went out from us, but they did not really belong to us. For if they had belonged to us, they would have remained with us; but their going showed that none of them belonged to us.”

1 John 2:19 parallels what many Calvinists say about people who fell away from the faith, they stopped being Christians. They’ll say anyone who turns away from the Christian faith never really turned to it to begin with! They’ll say that those who once believed The Bible but no longer never truly had The Holy Spirit enter them and regenerate them. They were very likely like I was until I was 17. There are nominal Christians out there; people who give intellectual assent to Christian belief but never really did anything about it never made a dedication to Christ. I speak from experience. I believed in the existence of God and the resurrection of Christ for as long as I can remember. I was raised in the Baptist Church. However, I never had any meaningful relationship with Christ. If I hadn’t believed God existed, my life wouldn’t have looked hardly any different. My life would have looked identical regardless of whether I intellectually acknowledged the truth of the church creeds or not. God woke me up at age 17 and from that point on my life changed forever.

So…many of these “Former Christians”, these eternal security believers will say, were exactly like I was. They were people who had “Belief That” but not “Belief In“. Even the demons believe that God exists, that Jesus is God, that Jesus rose from the dead (see James 2:19), but they’re not saved! Why? Because they haven’t dedicated their lives to serving Christ. I’ve always known this was true, and I’ve always known that many former Christians were certainly believers of this nominal kind. However, I found it extremely implausible (and still do to a certain extent) that Every. Single. Apostate. was a nominal Christian. However, 1 John 2:19 seems to be saying just that. It seems to be saying that if you stop being a Christian, if you go out from us; i.e the body of Christ,  you were never of the body of Christ to begin with, because if you were of the body of Christ (the Church), you wouldn’t have left. As implausible as it may seem to my mind that every single person who ever leaves the church never had The Holy Spirit in them, if that’s what the word of God says, that’s the view I’ll have to accept.

Philippians 1:6 says “…being confident of this, that he who began a good work in you will carry it on to completion until the day of Christ Jesus.”

This verse is talking about sanctification. It says that God began a good work in us and will carry this good work to completion until the day of Christ Jesus (i.e when we meet Him in Heaven). If believers truly do fall away, if it isn’t merely possible for believers to fall away, but that there have been and will be actual cases of apostasy, then what do we make of a verse like Philippians 1:6? If some believers truly do fall away then how can it be said that the good work God began in them was carried on to completion? 1 Corinthians 1:8 says the same thing: “He will sustain you to the end, so that you will be blameless on the day of our Lord Jesus Christ.” If some believers will truly fall away, how can it be said that God sustained them to the end?

I agree with the Can/Will advocates on this one. John 6:39-40 is merely expressing God’s initial will that no one who comes to Christ be lost, but God may, in His permissive will, allow some to be lost of their own free will. So unlike the Calvinist, I don’t think John 6 is a good place to look to for support for eternal security. However, all of other passages I cited in this blog post are good, strong evidence for The Perseverance Of The Saints.

The doctrine of Perserverance Of The Saints a.k.a Eternal Security a.k.a Once Saved, Always Saved is firmly rooted in scripture. I affirm the P of the T.U.L.I.P just as strongly as I affirm the T (it’s just those middle letters I take issue with). But how do we reconcile this biblical data with the data I talked about in the previous installment of this series? How is it that you can lose your salvation and you can’t lose it?

In the next installment of this series, I will explain how it is the case that both the Arminian’s set of proof texts and the Calvinist’s set of proof texts can both be affirmed without having to explain away one set or the other, as is so often done in these debates. I will explain how both sets of scriptures can be affirmed without tension or contradiction.

The Can/Won’t Model Of Eternal Security: Part 1 — The Case For Apostasy

If You Could Lose Your Salvation, You Would?