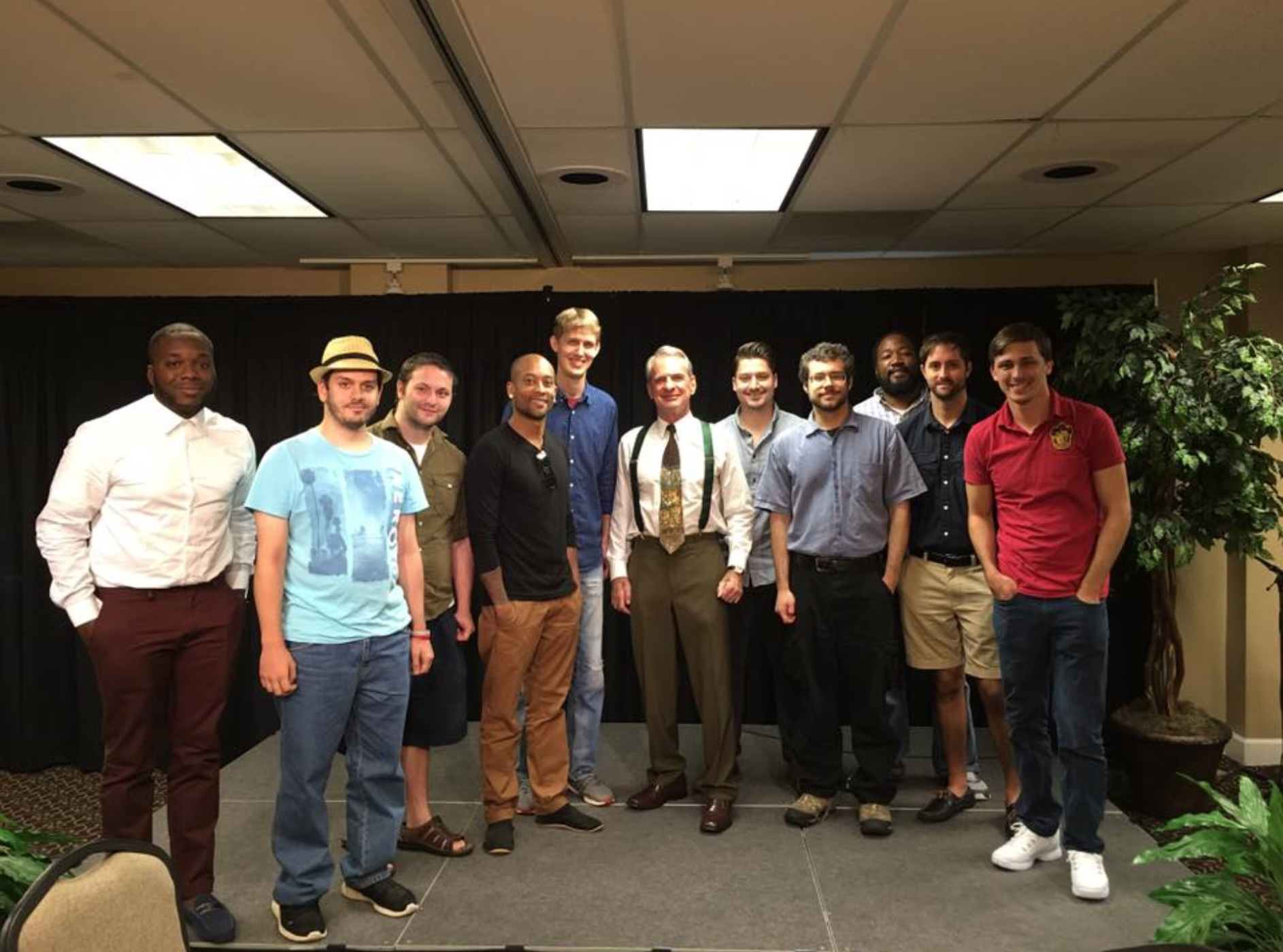 A Facebook group called the Christian Apologetics Support Group arranged an event in Georgia U.S.A to take place on August 14th 2016, with William Lane Craig. People were to drive or fly in from all over the country to have a special lunch and Q and A session with Dr. William Lane Craig after his Defenders class, which is currently on the doctrine of The Trinity.

I had no means to go there on my own, as I can’t afford to spend $300-400 at some hotel, and even if I could, my car is so old and unreliable that I’m very reluctant to take it anywhere long distance. It has already broken down on 3 different occasions. Fortunately, both of my hindrances were solved thanks to my good friends Richard Bushey (blogger of ThereforeGodExists.com and author of The Open Minded Christian) and Kevin Baldesare. Richard drove down from Virginia and picked me up. I gave him Inference To The One True God: Why I Believe In Jesus Instead Of Other Gods as a gift. I had him sign my copy of The Open Minded Christian: How To Engage Charitably With Fellow Sinners, and then my mother took a picture of us hold each other’s books.

We talked for a little bit, I showed him my 2 book cases worth of Christian Apologetics and theology books, and then set off to Atlanta. I ate some pizza as we were driving down the road, which Richard had brought with him. Richard and I tried to listen to Skillet‘s Comatose album, but it cut off on the 7th track for some reason. I think the CD had some dust on it. We decided to just listen to HIS Radio until we were out of range. We stopped for some gas and went inside to use the restroom. My A.D.D was on display as I started to walk off and left the car door open. I noticed it as we were approaching the convenience store, so I ran back and shut it. Then we continued our Journey to Georgia.

We arrived at Kevin’s house, took some pictures, and then left to meet the rest of the guys from the Christian Apologetics Support Group at a place (that I never heard before then) called Taco Mac which is a bar/restaurant. I had a hamburger and some french fries. Once we were done eating, we went back to Kevin’s place where I gave Richard and Kevin some gift bags with thank you letters and some theological decorations.

I cannot believe how unbelievably comfortable the recliners’ at Kevin’s house are! My goodness! I told Richard that the recliner in my bedroom feels like a rock when compared to his. They were wonderfully comfy!

I had Kevin take me, Richard, and Jacob up to his room to show us his collection of Christian Apologetics and Theology books. I brought a small Spider-Man journal with me, which I use to write down the names of books that I wish to buy and read in the future. I brought it with me precisely because I knew that I would see books at Kevin’s house that I would want. And I just jotted them down one after another. After that, we talked for a little while on creation and evolution. I first gave some reasons why I’m completely open to Theistic Evolution (a few of which I talked about in my recent article “5 Reasons Why I’m Open To Theistic Evolution”), but then I gave reasons why I don’t think Darwinian Evolution is true, and why special creation is a better explanation of the scientific evidence. 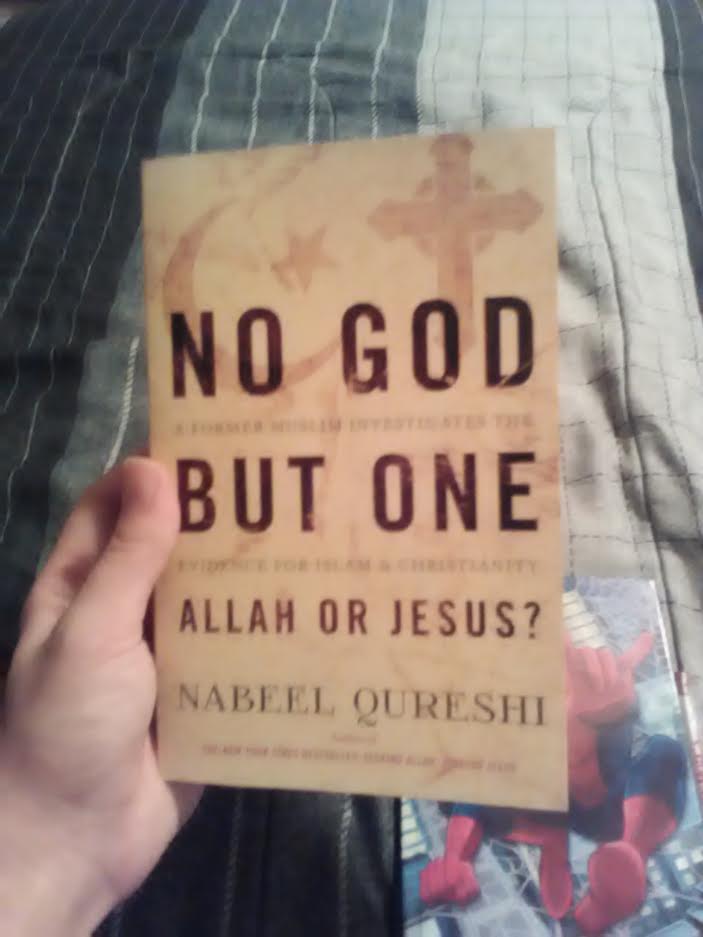 Richard gave me a copy of “No God But One: Allah Or Jesus” by Nabeel Qureshi, which was one of five copies that Zondervan sent him. After that, we went to bed. In the morning we went to the church where the Defenders class was going to be held. At the church, they had worship services being held in two different rooms. In one room, they were singing traditional worship songs (i.e classical hymns). In the other room, they were singing contemporary worship songs. Jacob and I attended the contemporary worship service while Richard and Kevin attended the traditional worship service.

After that, we listened to a sermon by the pastor, Bryant Wright, which was all about The Sabbath. After that, we attended the Defenders class where we listened to Dr. Craig’s lecture. Right before lunch, I gave William Lane Craig my book, Inference To The One True God and asked him to give me his feedback when he was done. He said he wouldn’t be able to promise that, since he gets requests like this all the time, but that he would if he could. I understand that. But regardless of whether he e-mails me to tell me what he thought of the book, he’s still got it in his possession and will be reading it at some point, and that is AWESOME! After that, I had Richard Bushey take a picture of me with William Lane Craig holding my book.

After that, we
had lunch. Kevin informed me that Dr. Craig and Jan had gotten up at
5:00am to prepare the sandwiches and other items of food that we ate. The food was very delicious. After that, Jacob drove Richard and I back to Kevin’s house [1]Kevin came later as he had something to do that day after the Defenders class was over. When Kevin returned, we watched a DVD of a debate William Lane Craig had with Austin Dacey. Once that went off, we went to McDonalds to have dinner. We came back to Kevin’s house and watched the movie Good Will Hunting before Kevin went to bed. Richard and I stayed up a little longer. We watched some short clips of debates between James White and a couple of Oneness Pentecostals. After that, we went to sleep.

Richard drove me back to my home in Piedmont, South Carolina. He helped me bring my luggage in, and then left for his home in Virginia.

I had a really awesome and fun time hanging with my Christian Apologist friends. If you guys are reading this, I’d like to say once again that it was nice meeting all of you. Also, I have to once again thank my friends Kevin Baldesare and Richard Bushey. Without you guys, I would not have been able to attend this event. Thank you so much for your kindness. Thank you, Kevin, for letting us stay at your house, and thank you, Richard, for driving me down there and back. I love you guys! You guys are awesome!