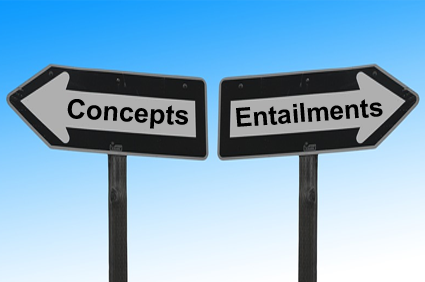 One of the trends I find in talking with people on certain subjects is this inability to separate a viewpoint from the view’s logical entailment. This is an impediment to discourse because it can lead to misunderstandings, confusion, and in the worst scenarios, severed friendships. I’d like to go into just a little bit of why we need to separate X from what the logical entailments of X are.

In the realm of theology, distinguishing a view from it’s implications prevents us from falsely labeling orthodox Christians as heretics. It may be in some cases that a theology’s logical entailments are heretical, but that doesn’t mean the viewpoint itself is heretical. There’s a difference between what a person confesses and what their confession logically entails. As long as the confession isn’t a confession of some heresy (e.g “There was a time when Christ was not.”), they are orthodox so long as they deny what their view logically entails.

For example, I have argued in several places on this site that divine determinism undermines the moral character of God and essentially makes Him an omnipotent, omniscient, omnipresent version of Satan. Divine determinism logically entails that God is evil, but it’s logically impossible for God to be evil, it therefore follows by modus tollens reasoning that divine determinism is false. Now, even though I firmly believe that divine determinism and God’s goodness are incompatible, I don’t consider Calvinists to be heretics. This is because no Calvinist I’ve ever met or read confesses divine evil, but declares just as strongly as I do “God is good!”. Because the divine determinist declares that God is good, I consider him my brother even though his view entails the opposite of his confession that God is good. As I like to say “An inconsistent Calvinist is an orthodox Christian”. Unfortunately, some Arminians don’t make this distinction like I do and therefore sever their ties with anyone in the reformed camp, labeling them as heretics and refusing to have fellowship with them. They don’t separate X from X’s entailment, and therefore they believe X itself to be a heresy. In this case, X is divine determinism.

Would perhaps YECs be a bit kinder to OECs and ECs if they did this? I think so. While I think it’s false that positing animal death pre-fall undermines the gospel, nevertheless, even if you think it did, that would not warrant you labeling OECs and ECs as heretics. At most, you should say that my view logically entails a heresy (i.e the gospel is pointless). Although it doesn’t, and it’s not the goal of this blog post to demonstrate that. Rather, it is to say that if you side with people like Ken Ham and Kent Hovind in stating that an Old Earth undermines the gospel, you should say “Your view entails a heresy, but since you deny that heresy and ergo are inconsistent, I will consider you my brother in Christ.” For those wondering why I believe pre-fall animal death isn’t a theological problem in the least, check out these blog posts on the subject; “Did Animals Die Before The Fall?” (Off site), and “The Case For Animal Death Before The Fall Of Man” (Off site).

Jonathan Thompson of Free Thinking Ministries said: “It does not necessarily follow that because a belief entails some other position that therefore every adherent or any one particular adherent of that belief actually believes in the entailment even if they should. It’s possible that these people are simply unaware of what their beliefs entail. They might also disagree that their beliefs actually bare the purported entailment. “

Far too often, I’ve been accused of the straw man fallacy when making arguments such as I did in the article “Atheists Must Affirm The Existence Of Everything In Order To Deny God” or my arguments against divine determinism on account that “We don’t believe that. We believe this.” I often find myself saying things like “I know you don’t believe Y. I’m not saying you believe Y. You believe X. What I’m saying is that X logically entails Y and that therefore X is absurd.” I’ve had to defend many reductio ad absurdum arguments with a response like this.

Keeping a concept distinct from its entailment will help you spot when someone is truly misrepresenting your view and when someone is merely arguing that your view entails something absurd (e.g divine determinism entailing God is evil, baptismal regeneration entailing works based salvation). And if you disagree that the entailment follows from your view, you should give a counter argument to show the opponent why the entailment isn’t an entailment.

It Prevents One From Actually Commiting The Straw Man Fallacy

Not only is an inability to distinguish concepts from entailments apt to make you deem reductio ad absurdum arguments straw man arguments, but you may actually commit the straw man fallacy in instances where the shoe is on the other foot. Such as if you say “Arminians deny that God is sovereign.” Some people (of which I am one) argue that simple foreknowledge undermines God’s sovereignty. Now, whether that’s true or not, the point here is simply that once again, this is an argument that X entails Y. Arminians do not actually deny that God is sovereign, but some young, restless, and reformed person (or even a Molinist like moi) listening to someone make that argument may have it registered in his mind that Arminians deny the sovereignty of God. And therefore, when he talks about the SF (Simple Foreknowledge) view to someone, he will misrepresent the SF Arminian view.

These are the reasons it’s important to be able to distinguish concepts from their entailments.