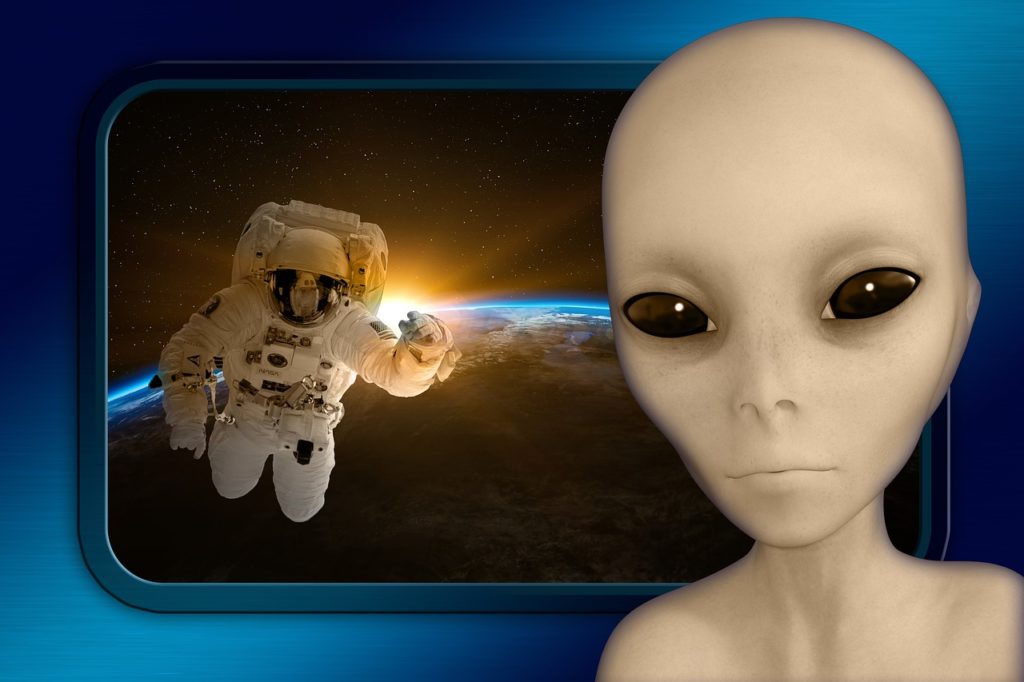 Anyone who knows me knows that I LOVE science fiction. When I was a child, I fantasized about time traveling and space traveling, meeting my future or past self, or meeting with beings on a far away planet. There isn’t much science fiction I don’t enjoy. If I’m not a fan of it, it’s most likely because I haven’t tried it yet. I like Star Wars, Planet Of The Apes, Doctor Who (I’m a BIG Whovian), and The Men In Black movies. But as I watch Yoda ride on young Luke’s back and he’s training him to be a Jedi, or The Doctor take on a fleet of Daleks, I sometimes wonder “If all of this were true, what would that say about The Christian worldview?” In other words, how would intelligent extra-terrestrial aliens fit into the Christian worldview if they actually exist? Would Christianity be undermined? Would it be bolstered? Would it make no difference either way?

Many people think that aliens would actually be a harsh blow against Christianity. For example, in the movie Paul (2011), Kristen Wiggs played a character named Ruth Buggs who was a Christian, albeit a common caricature of one. When she learned of Paul’s (the alien’s) existence, she renounced her Christian faith and started swearing like a sailor.1

Why think that aliens = no Christianity? For one thing, The Bible teaches that humans are created in God’s image and are the crown of His creation (Genesis 1:26-27). Moreover, The Bible’s creation narratives seems to focus solely on Earth and how it relates to humanity, suggesting that God crafted the universe for humanity’s benefit. The argument goes that if the cosmos is populated with other intelligent species, this biblical teaching is false. Moreover, The Bible teaches that Jesus became a human being and died on the cross to atone for the sins of the world (Isaiah 53, John 3:16, 1 John 2:2, 1 Peter 3:18). If there are other intelligent species in the universe, did Jesus die for their sins too? And if not, why not? Does He not love them? Are they doomed to eternal Hell? And if He did die for them, how could we tell them that? The Great Commission (Matthew 28:19) seems a little unreasonable if we’re expected to zoom around the universe. Even in this advanced age, we’ve only gotten as far as the moon. How does God expect us to bring the gospel to aliens?

I would like to make a few points on this issue to show that; no, aliens would not refute the Christian worldview. There would arise some theological questions that we would have to work through, but nothing shattering to any central tenet of the faith.

First Off, The Case For Christianity Would Not Be Undermined By Little Green Men

First of all, if NASA discovers a planet populated with advanced alien beings like us, exactly which argument for God’s existence would that discovery undermine? Would it refute The Kalam Cosmological Argument? No. It would still be the case that everything that has a beginning had something to cause it to come into being, and it would still be the case that the universe came into being (i.e The Big Bang evidence, the second law of thermodynamics, and two philosophical arguments against actual infinities demonstrate this), which would mean that the universe had a cause that brought it into being. And the conceptual analysis of the Cosmological argument that demonstrates that the cause is a spaceless, timeless, immaterial, powerful, uncaused, personal being would still stand. What about The Fine-Tuning Argument? Would it be refuted if little green men showed up? No. The Strong and Weak Nuclear Forces, Gravity, Electromagnetism, etc. would still have to fall within extraordinarily narrow ranges for life to exist [1]anywhere in the universe, not just here, and design would still be the best explanation.

A moral law would still require a moral law Giver, and a Maximally Great Being would still exist in some possible world, and ergo in all possible worlds (I’m referring here to the modal Ontological Argument). None of these arguments would be refuted if aliens showed up.

The Minimal Facts Case For Jesus’ resurrection wouldn’t be undermined either. Historical methodology would still show that (1) Jesus died by crucifixion, (2) His tomb was found empty on that first Easter morning, (3) His disciples believed they saw Him alive after His death, (4) church persecutor Paul became a Christian on the basis of what He perceived as a postmortem appearance of Jesus, and (5) Skeptic James converted on the basis of a postmortem appearance of Jesus. And “He Is Risen” would still be the best explanation for those 5 facts.

Secondly, The Image Of God Isn’t About Mental Faculties

Most people teach that what The Bible means by “created in God’s image” is that God imbued us with a spirit that has mental faculties that no other creature has; such as free will, rationality, and the knowledge of moral good and evil. These, many theologians say, are what constitute the imageo dei. But I agree with the conclusions of John Walton and Michael Heiser that, while these mental attributes are pre-rerequsites of the imageo dei, they are not themselves the imageo dei.

To be made in God’s image is simply to be God’s representative on Earth. In ancient near eastern culture, people would put statues of their gods in their temples. The people never believed the statues were gods, but that the statues represented their gods. Likewise, many kings would have statues of themselves around the Kingdom to remind subjects of their sovereignty even though they might not be present. Heiser and Walton make the point that we are “God’s statues” so to speak. The universe is God’s temple, and we are His representatives in it.2

I do think that rationality, free will, and a moral compass are necessary conditions for the imago dei, but they are not, by themselves, sufficient conditions. The imageo dei is a status bestowed unto us by God.

If rational, moral creatures with free will were found on numerous other planets, we might say that we bare God’s image, but they don’t. God has only revealed in scripture that humans are made in His image and no one else. It never even says that the angels and demons bare his image, and they are certainly, rational, moral agents. Unless we have a new divine revelation, we wouldn’t be able to say whether Yoda is made in the image of God or not.3

God chose Israel from among the nations to be His representatives to the world, and the nation which would bring forth the Messiah. Other nations existed, but they were not considered God’s chosen. Likewise, we could say that God chose planet Earth to represent Him to the rest of the cosmos. Perhaps God intends Christians in the 25th century to spread the gospel as they colonize. Aliens being rational and moral creatures wouldn’t threaten the doctrine that humans are made in God’s image.

But What About Their Salvation?

But, one may wonder about how aliens relate to soteriology. How do aliens relate to the gospel message? Are they sinners? Do they need salvation? And if so, did Jesus provide it for them? We can’t even begin to answer these questions because we don’t even know if intelligent life even exists out there at all.

But let’s say it did. It’s possible that homo sapiens are the only race that fell into sin. If so, Jesus wouldn’t need to die for them because they wouldn’t have strayed from their Creator. Also, if they have the mindset of mere animals, they wouldn’t need salvation either, any more than a Gorilla is in need of salvation. Animals aren’t moral agents, ergo they can’t sin, ergo they can’t be in need of salvation.

Of course, there is the belief that the reason God assumed a human nature was so that he could redeem the human nature. Athanasius of Alexandria said “That which is not assumed is not saved” which made any denial of Jesus’ human nature a heresy. Well, we might postulate that Jesus became incarnate multiple times, becoming multiple different species and dying for them. One gigantic problem presents itself to this proposal: The Bible says Jesus only died an atoning death once. In 1 Peter 3:18 says “For Christ also suffered once for sins, the righteous for the unrighteous, to bring you to God. He was put to death in the body but made alive in the Spirit.” and Hebrews 10:10 says “And by that will, we have been made holy through the sacrifice of the body of Jesus Christ once for all.” The latter is even more potent when you take the verse in contrast. The writer was contrasting lamb sacrifices by priests, which had to be done over and over and over, with Christ’s sacrifice, which he says was done one. This doesn’t seem to allow room for posting that Jesus took the form of multiple different aliens and died for those races’ sins.

Of course, we could deny that Jesus needed to become human to save us. We could say that Jesus simply needed to take on a physical form so that He could die as a sacrifice, something that as pure deity, Jesus could not do. Therefore, Jesus only need assume one form and die a brutal death, therefore paying the penalty for all people everywhere, even those not of this planet. Maybe, maybe not. This would certainly be an issue theologians would have to carefully think through.

Would The Great Commission Be Unreasonable?

What about the objection that God would be commanding us to fulfill an unreasonable request in telling us to preach the gospel to every creature? Well, unevangelized people have existed for a long time on this planet alone. I think God could deal with these unevangelized alien peoples the same way he deals with unevangelized humans, until we humans can become advanced enough to travel the stars.

How does God deal with the unevangelized anyway? That’s a good question, and it’s beyond the scope of this blog post to answer that. Check out chapter 5 of my book A Hellacious Doctrine: A Defense Of The Biblical Doctrine Of Hell for the answer.

Aliens are not a potential defeater of the Christian worldview. Ruth Buggs made a hasty decision giving up her faith upon learning of Paul’s existence. I find her lack of faith disturbing. Yes, aliens would raise a couple of soteriological questions that we would have to think through, but no central tenet of Christianity would be overthrown. The case for Christianity certainly wouldn’t be overthrown.

If The Doctor showed up in his…err….her T.A.R.D.I.S and asked if I wanted to come with her, I would say yes….and I would bring my Bible with me. And I would definitely pray before every fight with a Sith Lord.

This apolo-jedi is signing off. May the fourth be with you.

1: Yes, I admit that I did watch this movie when it first came out. I didn’t really care for it because of all the cursing and crude humor. Some of it was funny, but the coarseness of the film just kind of ruined it for me. Nowadays, I stay away from R rated films because of that reason. In fact, I can’t even remember the last time I watched an R rated film. I have still yet to watch Deadpool.

2: For more info on this topic, see my article “The Image Of God, Mental Faculties, and The Sanctity Of Life”

3: Although we could say that about The Doctor. He is half human on his mother’s side after all.