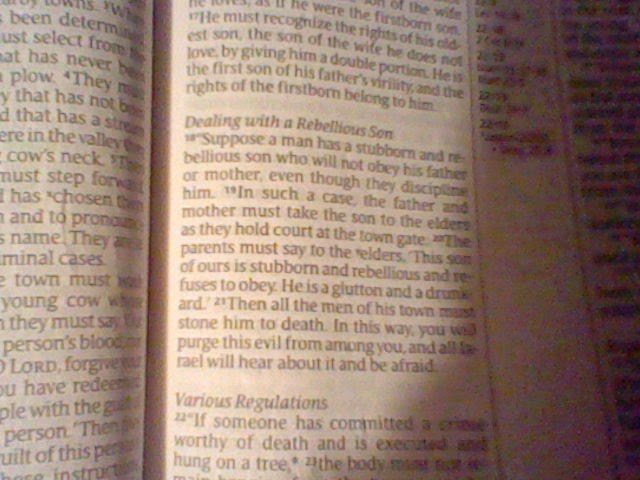 There are quite a few things in the Old Testament that seem gruesome at first glance that God has either done or commanded others to do. I often times have to give arguments against atheists in internet debates to show how a lot of these things aren’t as bad as they’re making them out to be, and how God is wholly justified in what He did (for example, the destruction of the Canaanites). But this is one Bible passage Until recently, the Bible passage I’m about to exegete for you really bothered me , and when you read it for yourself, you’ll see why.

“If someone has a stubborn and rebellious son who does not obey his father and mother and will not listen to them when they discipline him, his father and mother shall take hold of him and bring him to the elders at the gate of his town. They shall say to the elders, ‘This son of ours is stubborn and rebellious. He will not obey us. He is a glutton and a drunkard.’ Then all the men of his town are to stone him to death. You must purge the evil from among you. All Israel will hear of it and be afraid.” – Deuteronomy 21:18-21

God’s theocracy in Old Testament Israel requires that a son who has been unruly should be put to death. We don’t do this today because most of the laws in Leviticus, Numbers and Deuteronomy were only meant for Israel before Jesus Christ came. It is important to remember that the Mosaic Law was for God’s covenant people, Israel, living in a theocracy. The Old Testament Law is not in force today (see Romans 10:4; Galatians 3:23–25; Ephesians 2:15). But why in the world should a rebellious son be put to death under Old Covenant law? Moreover, what kind parents would take their kid to the courts and tell them this knowing that their son would be stoned to death? This seems like overkill. Certainly something needs to be done about an unruly son, but execution? Couldn’t they at least send him to prison for a few years or exile him from the nation of Israel or anything else less severe? Why did they have to kill him?

From a theological perspective, I don’t struggle with this too much. Delinquents are bad people who sin constantly and God is under no obligation to save us or keep any of us alive. The only reason why He doesn’t strike people down immediately when they commit a sin is because He loves us and is waiting on us to repent. He is loving and merciful. Moreover, God is the author of life (see Job 1:21, 1 Samuel 2:6, Psalm 75:7, Deuteronomy 32:39) , and as the author of life He has the right to take life as He sees fit.

However, from a judicial perspective, it does seem odd. There are crimes mentioned in Old Testament law that deserve death and crimes that do not. One would think being a bad boy would fall under the latter category, but instead it falls under the former. One would think God would be able to come up with some sort of punishment or something lesser than execution to resolve the issue, right?

There are several things we need to understand about this passage.

1: The Sin Was Ongoing And Continuous.

Deuteronomy 21:18 indicates that the sentence was simply done subsequent to an unrelenting refusal to heed both the mom and the dad and after all discipline coughed up no results. The parents have tried to deal with their son time after time after time after time, but nothing they’ve ever tried before produced any results. We see in this passage that stoning is the last resort in dealing with a delinquent son. It’s what the parents resorted to when all else failed.

2: It Was Deep Seated Sin

Verse 20 tells us that not only is he unruly, “he is a glutton and a drunkard.”. Now we see that this is not simply some child who refused to clean up his room once or twice. This is not about a 10 year old that played ball in the house after being told over and over not to. This is not about a kid who misses his or her curfew; this is a true delinquent, causing trouble not only to his parents, but also society. He was likely a danger to his parents and to society. Modern examples of kids who would fall under this category are thugs who kill multiple people in order for a gang to accept them into the fold, or someone who gets drunk and starts fights with people in back alleys, etc. It’s the kind of person who beats up anyone who tries to tell him what to do.

3: The Punishment Was Not An Impulsive Act Of Anger Or Vengeance.

In modern times, this would be like a mother or a father seeing his son on CNN or Fox News or something committing terrible crimes and subsequently turning them in to the police. If parents know their kid is engaging in endeavors that hurt other people, they have a moral obligation to report the crime to the authorities and allow the kid to accept whatever punishment the courts see fit. Fortunately, today, the kid would likely be sentenced to prison for several years, or be sent to a “Scared Straight” program rather than being stoned (unless the son or daughter committed a grizzly murder, in which case they would likely be given lethal injection). But the principle of turning someone in to the authorities existed back in ancient Israel as it does today. It’s merely that the consequences are different now.

4: Finally, The Punishment Was Designed To Preserve The Nation.

Verse 21 tells us that one of the reasons that this law was given was to preserve the nation of Israel. It was to A): purge the evil from among them, and B: act as a deterrent for future acts of violence and cruelty. Just think about it; if you were living in a nation where being a wild child could end up getting you killed, that would be an extremely powerful motivating factor for you to do exactly what your mother and father told you to do. You wouldn’t beat them up, you wouldn’t get drunk and start fights in bars, you wouldn’t join gangs, you wouldn’t become a glutton, you wouldn’t throw things at them whenever they said something you didn’t like. You would be very submissive because you feared the elders of Israel. I’m inclined to think that a major reason this law was put into place was to act as a deterrent to young teens and early adults to not be violent, gluttonous, drunk people. It would bring order to Israel.

In summary, this was very likely not 5 year old children we’re talking about her, it’s very likely we’re talking about children close to being fully grown, kids around 15-18 years old. Moreover, this wasn’t something that was done after one act of disobedience. Deuteronomy 21:18 indicates that the sentence was simply done subsequent to an unrelenting refusal to heed both the mom and the dad and after all discipline coughed up no results. The parents have tried to deal with their son time after time after time after time, but nothing they’ve ever tried before produced the desired outcome. We see in this passage that stoning is the last resort in dealing with a delinquent son. It’s what the parents resorted to when all else failed. Moreover, this wasn’t done to a kid who simply refused to clean up his room, talked back, or played ball in the house. This was someone who was a dangerous, rebellious individual. This was the type of person you see in Juvy Jails and “Scared Straight” programs. These were some bad dudes, not simply someone who forgot to say “Yes mam” and “No, mam”. Thirdly, this wasn’t something an individual parent could take upon themselves. The courts had to decide whether the child was guilty and if he was guilty, then they would exact the punishment onto them. Old Testament law did not allow an individual parent to simply throw a rock at a kid who didn’t do what they were told. Finally, the law was in place to act as a deterrent to potential future offenders. After all, just think about it; if you were living in a nation where being a wild child could end up getting you killed, that would be really strong motivation for you to do what your mother and father told you to do. You wouldn’t beat them up, you wouldn’t get drunk and start fights with people, you wouldn’t join gangs, you wouldn’t become a glutton, and you wouldn’t throw things at your parents whenever they said something you didn’t like. You would likely be a very well behaved individual.

In conclusion: as harsh as this law may seem at first glance, I don’t think it makes God out to be an unloving and cruel law maker. God has reasons for everything He does and everything He tells us. God does not make arbitrary laws. Every rule He sets in place is for the good of His people….even if we may not always understand them right away.

Answering Two Common Objections To The Author Of Life Argument