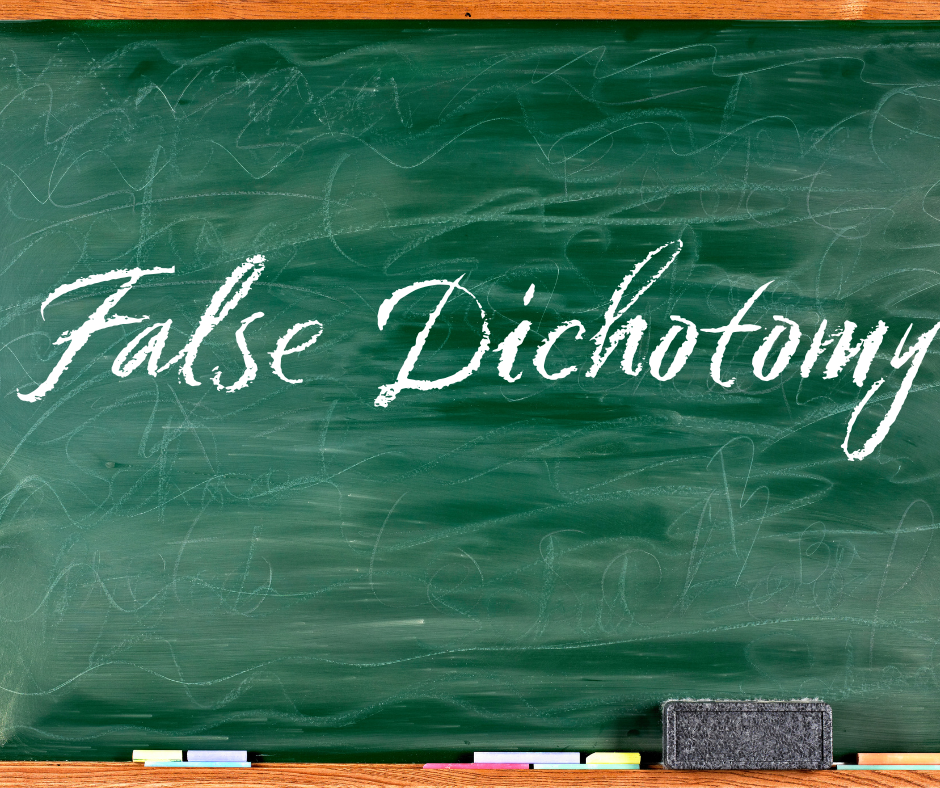 You’ve either got to read this blog post or play Call of Duty! There is no third alternative! Now, choose! CHOOSE! Okay, if you’ve made your choice, then welcome to part 27 of this blog post on logical fallacies. We looked at 23 informal fallacies in this series and we’ve looked at 3 formal fallacies. If you don’t know the difference because you’re either new to this site, or haven’t been following this series, or what have you, click on this link –> https://www.youtube.com/watch?v=T_yFszI7Aso .

Unfortunately, there’s one informal fallacy I forgot to address before I moved onto the formal fallacies, so let me just address it in this blog post.

A False Dichotomy is when someone presents with 2 alternatives and says you have to choose either one or the other, when in reality, more options than just those 2 are available. If there’s at least 1 other option than the 2 presented to you, then the person talking to you is guilty of presenting a false dichotomy.

Now, it should be said that not all dichotomies are false ones. Sometimes you do only have 2 options available. For example, you can either believe in Christ and go to Heaven when you die, or reject Christ and end up in Hell in your afterlife. There’s no third alternative, when you die, you’ll end up in one of those 2 places. This is a true dichotomy. A false dichotomy would be like the tongue-in-cheek example I gave in the opening paragraph of this blog post. I said that you could either read this blog post or play Call Of Duty. That is not true. Instead of reading this blog post, you could play a Pokemon video game, or a Mario video game, or maybe no video game at all. Maybe you could choose to go jogging, or see a movie, or take someone out to dinner. There are a lot of other things you could choose to do than read this blog post. So saying your only other option is to play Call Of Duty would be a false dichotomy.

For one, science proves premises in philosophical arguments for the existence of God. For example, Big Bang cosmology and the second law of thermodynamics prove that the universe (all matter, energy, space and time) came into being a finite time ago. There was nothing and then BOOM! Everything came into existence! This is the second premise of The Kalam Cosmological Argument for God’s existence. The Kalam argument is formulated as follows: (1) Whatever begins to exist has a cause. (2) The universe began to exist. (3) Therefore, the universe has a cause. Followed by a conceptual analysis that reveals that the universe’s cause bares many attributes that paint a picture that looks like God. By the way, science also proves the first premise since every major and minor discovery about the world reveals that every effect had a cause that preceded it. No phenomenon has ever been demonstrated to be uncaused (i.e nothing caused it to occur).

Science also proves the the laws and constants of physics unexpectedly conspire in an extraordinary way to make the universe habitable for life. Laws of physics like gravity, the strong and weak nuclear forces, the electromagnetic force, the cosmological constant, and so on, have to take on just-right values in order for the universe to permit life. Were any of these constants or quantities stronger or weaker, bigger or smaller, faster or slower, later or earlier, the universe would be barren today. Ever since this discovery, scientists and philosophers have only known of 3 possible explanations; physical necessity, chance, or design. In my article “The Fine Tuning Argument For God’s Existence (Updated Version)” and in my book Inference To The One True God: Why I Believe In Jesus Instead Of Other Gods, I argue that neither physical necessity nor chance can explain why the universe is life permitting and that intelligent design is the best explanation.

There are also finely tuned parameters outside of physics. The above examples affect the entire universe, but there are also parameters that need to be precisely calibrated in order for life to exist in a particular region of the universe, otherwise that particular region won’t have life. For example, a planet needs to have a rotational rate of 24 hours (no longer, no shorter). A planet has to be of a just right size and a just right distance from its home star. That home star has to be of a just right size. The planet has to have a just right moon (a moon of the just right size) in order to slow the rotation rate of the planet to 24 hours. The planet must be surrounded by 4 gas giants of the just right size and distance from the home planet in order to shield the life forms on it from comets and meteors from outside the solar system. Astronomer Hugh Ross lists over 400 characteristics that must be just right in order for life to exist in a local region of the universe. In chapter 3 of my book Inference To The One True God: Why I Believe In Jesus Instead Of Other Gods, I go into 27 of these parameters and argue that the best explanation for why these features of our galaxy, solar system, and planet are as they are is because an intelligent designer made them that way. It is far too improbable for these things to have come together by mere chance.

Moreover, the chronology of events during the creation week in Genesis 1 is backed up by “secular” science!

The Bible’s prophets and apostles stated explicitly and repeatedly
several properties of the big bang, a transcendent cosmic beginning a finite
time period ago, a universe undergoing a general, continual expansion, a
universe governed by decay or entropy, and a universe that will eventually come
to an end.
THE BIBLE SAYS:
1.   The universe
has a beginning (Genesis 1:1; Hebrews. 1:10,
Hebrews 11:3).
2.   Time has a
beginning (1 Corinthians 2:7; Ephesians 1:4; 2 Timothy 1:9; Titus 1:2; 1 Peter
1:20).
3.   God is
“stretching out the heavens” like a tent (Job 9:8; Psalm 104:2; Isaiah 42:5;
Jeremiah 10:12;
Jeremiah 51:15; Zechariah 12:1)
4.   Is governed by
a “law of decay” (Romans 8)
–
5.   Someday this
universe will come to an end and be replaced by a “new heavens and a new earth”
(Psalm 102:26, Isaiah 34:4; Hebrews 1:10-12;
2 Peter 3:10,
Revelation 21:1).
SCIENCE SAYS:
1. The universe began in a hot origin event dubbed by
Fred Hoyle as “The Big Bang”. Our whole universe suddenly appeared
and was in a hot dense state during the first few seconds of it’s history.
2. Time had a beginning at The Big Bang.
3. The universe has been expanding since its origin and
will continue to expand in the future.
4.  The universe is
governed by a law dubbed “The second law of thermodynamics”. This law
brings things in the universe toward decay and disorder.
5.  Eventually, the
universe won’t be able to sustain life; the universe may collapse, or at the
very least it will run out of energy (as the second law of thermodynamics
predicts).
Obvious parallels emerge from these descriptions. Although
it is certain the bible writers didn’t specifically have the big bang in mind
when they wrote those words, it seems bizarre that they describe so many things
that parallel the descriptions of Big Bang cosmology if The Bible were merely a
human fabrication. Perhaps that while THEY weren’t thinking of the big bang
theory, the God who inspired their words was. In describing cosmology, The
Bible authors did a pretty good job.
Moreover, The Bible accurately describes the order of
animals that came into existence. Evolutionists date the first appearance of
animals in a certain way. Unbeknownst to them, the order that they put the
animals’ first appearance in, in evolutionary history, is the same order that
The Bible puts them in. If you examine the evolutionary timeline, you will see
that before humans came beasts, cattle, and rodents, etc. Before those, there
were birds. Before birds were reptiles. And before reptiles were sea creatures.
So it goes like this: sea creatures, reptiles, birds, beasts and cattle, man.
In Genesis 1, you can see the very same timeline, except for the reptiles. I
think I know why reptiles were omitted from the Genesis account, but space does
not permit me to go into that here.
As you can see, atheists present a false dichotomy when they tell people that they have to choose between science or faith. We can embrace both!

This is the false dichotomy that a lot of religious leaders as well as the secularists propagate. People who are taught in church that YEC is the only valid interpretation of Genesis 1 and that if YEC is false, Christianity is false, those people are in danger of losing their faith when they go off to college or investigate scientific journals, or go off to become scientists themselves. If they find that YEC is false after years of being taught that the falsification of YEC is the falsification of Christianity, they become atheists! I’ve heard too many testimonies in The Old Earth Creationist group I run of people who have either lost their faith but came back to it when they realized there’s more than just YEC and atheistic evolution, or people who almost lost their faith but stumbled upon OEC or TE literature and realized that YEC is only one of several views of origins that a Christian can hold.

I reject evolution, but I also reject a young earth. I agree with the evolutionists that the Earth and universe are billions of years old, but I believe God created the first animals and the first 2 humans in special creation (i.e He spoke and they came to be), I believe Genesis 1-11 are historical and chronological events, and I believe human sin is the reason God cursed creation [1]I just think human sin logically preceded God cursing creation instead of chronologically. I believe everyone inherited a sin nature from Adam. These are beliefs I share with YECS. Where we differ is how long the days of Genesis 1; 24 hours or millions of years? I give several biblical reasons for taking the latter view in my article “Several Reasons To Think That The Creation Days Are Long Time Periods”. If you want me to give my reasons for being OEC, I advise you to read “Several Reasons To Think That The Creation Days Are Long Time Periods” as it is not the purpose of this blog post to argue in favor of the day-age position. Anyway, the point is; there are other options available than embracing atheism and macro evolution or embracing theism and young earth creationism. YECs and Atheists present a false dichotomy when they tell you that you have to choose one or the other.


That does it for today’s blog post. Come back to Cerebral Faith tomorrow to read about another logical fallacy.