A few days ago, I attended the Truth For A New Generation
conference in Spartanburg South
Carolina. This was (I think) the 4th
apologetics conference I’ve ever attended. I had a really good time and listened
to some great speakers. The first day and the second day were both equally
enjoyable. The Benham Brothers told about their experience of getting their
show on HGTV cancelled because of their view about homosexual marriage. They
told the narrative of all of the events that led up to that moment, but the
main point of the sermon was to encourage fellow believers not to knuckle under
as society persecutes us for our beliefs. Alveda King spoke shortly after the Benham
Brothers finished and boy was that a good speech as well. The last speaker for
the first night was Billy Graham’s grandson Will Graham. I was quite surprised
to see just how much alike he was to his father Franklin (who was also just
like his father Billy). I mean, they looked a lot alike, they sounded a like,
and he even had the same preaching style as Franklin!
This kind of got me wondering whether I’m that much like my father. My
mother certainly seems to think so!

What Sermons/Lectures
did I Attend?
In every conference, they usually have multiple speakers
speaking at the same time (in different rooms of course) so when one attends,
they have to pick and choose which ones they want to attend. On the first
night, they only had one speaker at a time and those were the 3 I mentioned
above. Here are the ones I attended:
Day 1
1: The Benham Brothers – Whatever The Cost
2: Dr. Alveda King – The Future Is Now: 21st Century Leaders
Unite
3: Will Graham – TNG Is Honored To Have The Reverend Will
Graham Share The Good News Of Jesus Christ
Day 2
1: Mark Mittelberg – Contagious Christianity
2: J Warner Wallace – A Detective Looks At Christ’s
Resurrection
3: Stephen Meyer PhD – Return Of The God Hypothesis
4: Todd Starnes – TNG Is Honored To Present Fox News
Journalist Todd Starnes
[1]then we had a 1 hour lunch break
5: Eric Stakelbeck – Why You Should Care About ISIS
and Iran
6: Stephen Meyer PhD – Darwin’s
Doubt
7: Dave Glander – Shroud Of Turin:
History Or Hoax?
8: Lee Strobel – Heroes Of The Faith
(Note: My schedule said it was going to be called “The Case
For Hope” but he said he changed his mind about the topic of his speech at the
last minute)
9: The Debate Between Alex McFarland and David Silverman
called “America’s
Future: Better With Or Without God?”
Pictures
I was able to get my picture taken with several of the
apologists I know and love so well. I had J Warner Wallace sign my copy of “God’s
Crime Scene” but unfortunately, I forgot to ask him to take a picture with me
before he left. Oh well, maybe next time. I was able to get my picture taken
with several of them, including my friend Dave Glander, who I met in an
apologetics group several years ago and whom I meet up with every time I attend
one of these conferences.
PICTURE 1: EVAN MINTON with LEE STROBEL 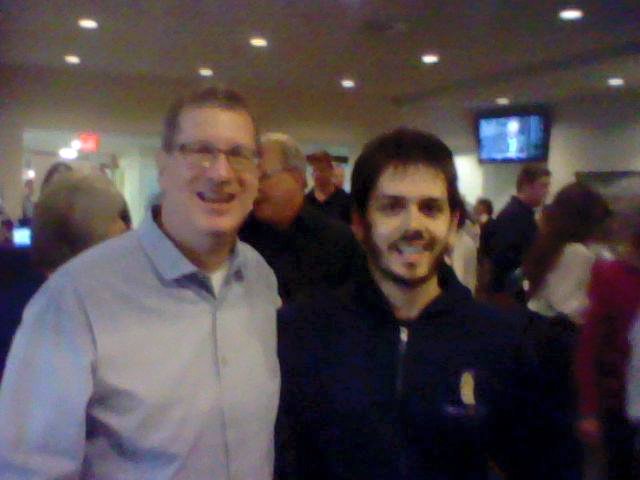 I was thrilled to be able to meet Lee Strobel! If you’ve
read the “About The Author” page on this site, you’ll know that it was Lee
Strobel who is the one who got me into apologetics. In fact, I told him that. I
said “Are you Lee Strobel?” and he said “Yes. Hi!” and I said “Good! I was
looking forward to meeting you. You’re the reason I got into apologetics.” And
I told him that several years ago, I was struggling with intellectual doubts
about Christianity and how I was essentially losing my faith because of them,
but that one night one of my Facebook friends posted a link to his film “The
Case For A Creator” which I clicked on and watched. I said that I was just
blown away by the powerful scientific evidence that establishes the existence
of God and the doctrine of creation. I told him that I run a blog and that I
eventually plan on getting a Master Of Arts in the field of apologetics to do
the work of an apologist as a full time career. I said “I just wanted you to
know how God has used you to impact my life”. He said “That’s just excellent.
Thank you for coming and telling me your story. By the way, what’s the name of
your blog? I’ll look it up later.” And I told him “Cerebral Faith. www.cerebralfaith.blogspot.com.”
So for all I know, Mr. Strobel could be reading this post right now!
I unfortunately forgot (at that moment) to have him sign my
copy of “The Case For Christ” but fortunately, I was able to meet him after he
gave his talk “Heroes Of The Faith”. I went up to him and he said “I remember
you! You’re Evan.” And I said “That’s right. When I met you in the hallway, I
forgot to have you sign my copy of The Case For Christ. Could you do that right
now?” and he did.
PICTURE 2: EVAN MINTON with DR. STEPHEN MEYER 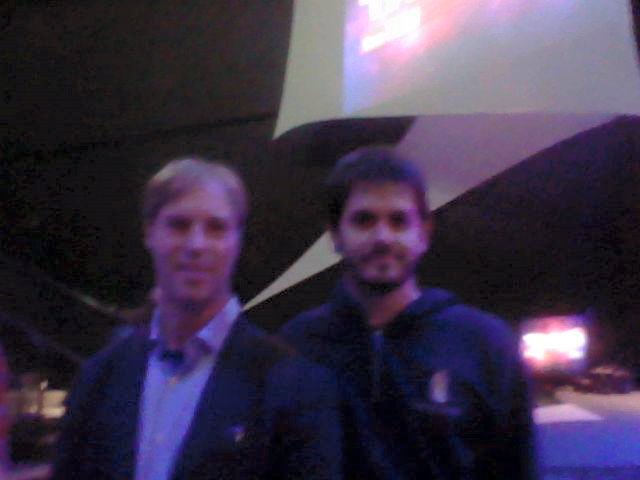 I got to meet the scientist/philosopher Dr. Stephen Meyer
whom many people know as one of the leading proponents of Intelligent Design
theory. This picture was taking immediately after he gave his talk “Darwin’s
Doubt”.
PICTURE 3: EVAN MINTON with ERIC STAKELBECK 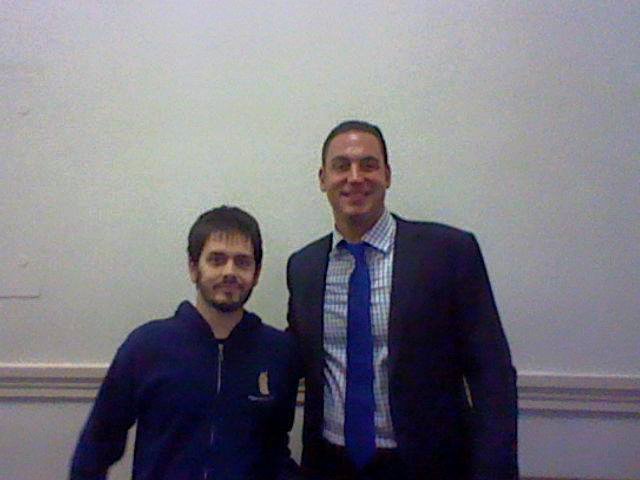 I was pleased to meet Eric
Stakelbeck just as he was walking out the door to leave (which was adjacent to the
room my friend Dave was about to give a talk in). I asked him if he could give
a video shout out to my mother who is a huge political junkie and also a fan of
his. He did, and then I had this picture taken with him.
PICTURE 4: EVAN MINTON with
DAVE GLANDER 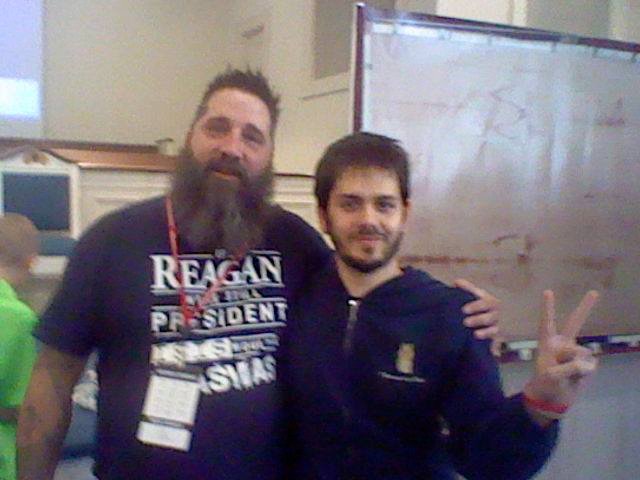 Right after Dave gave his talk on
the Shroud of Turin, I had him take this picture with me.
PICTURE 5: AIRPLANE! 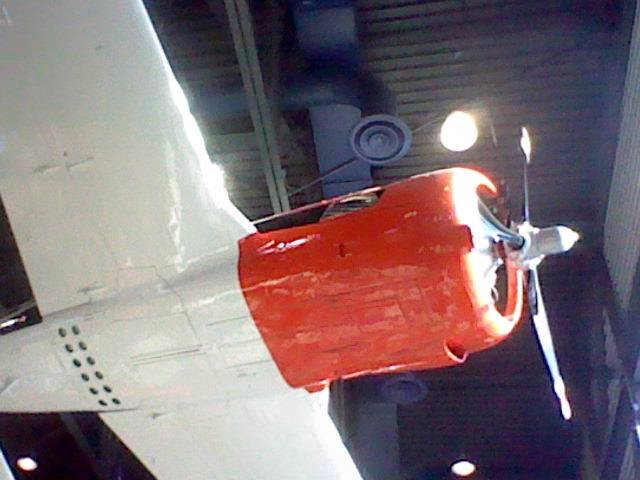 In the place where I ate my lunch
earlier, there was this big airplane suspended in the air. I was quite
surprised!
The Debate
The final event of the conference
was the debate between Alex McFarland and David Silverman (president of
American Atheists). The topic was on whether or not America would be better with or without a heavy religious
influence. You know, I thought to myself afterwards that hearing atheists talk
is like walking into a badly done haunted house. You think you’re going to get
scared out of your wits, but when you go in there, you see how campy it is and
that the people did not put much effort into making it scary, and that it was a
huge waste of time. Every time I’m about to hear an atheist speak, or am about
to debate an atheist, or read a blog post written by an atheist, I tighten up
on the inside thinking I’m about to hear something that’s going to destroy (or
least harm) my faith, but then…what I hear/read is just the same old things
I’ve heard a thousand times before. David Silverman’s arguments were the same
thing: “There’s no proof that Christianity is true”, “You’re only a Christian
because you were born in a Christian home, if you were born in a Muslim or
Buddhist home, you’d be a Muslim or Buddhist”, “Religion stifles scientific
advance”, “Christianity promotes inequality”, blah blah blah blah blah.
At one point David asked the
audience “In your minds, what would I have to do to win this debate?” and I
said under my breath “Give better arguments”. Dave Glander was sitting right in
front of me, and I’m guessing he heard me because as soon as I said that, he
started chuckling (as did the people sitting right next to me).

David’s arguments weren’t the only
thing that was bad though. His attitude was bad as well. He was snarky,
condescending, and he seemed angry. In fact, as the debate went on, he seemed
to get angrier and angrier. Meanwhile Alex was just the perfect gentleman. He
was gentle, polite, maybe a little too polite. I mean, David kept interrupting
him. I wish he had been a little more assertive so he could get his points
across. You can be assertive and polite at the same time, though I understand
that it’s not always easy to blend the two.
Conclusion
I greatly enjoyed my time at Truth
For A New Generation 2015. I thank God for making the way for me to attend this
year.
Liked it? Take a second to support Evan Minton on Patreon!